You’d think semi-secret surf spots are rarer than hen’s teeth. But you might just be wrong. Seamus Allardice for one thought they were rare objects of his fantasies, until not so long ago. And he’s never been so happy to be proven wrong.

It was too early on one of those days of milky winter sunlight in the Boland and I was waking up from four hours of near comatose sleep after a typical Friday night out in Stellenbosch. A bunch of us had made plans to meet up with an old varsity mate, Ryan; in a little holiday town about an hour’s drive away and we were running late before we started. Mark was still drunk, while Bjorn and Ricki were far more interested in sleeping off their hangovers snuggled close to their lady friends. Fortunately for them (as it turned out) Pat and I were single, relatively hangover free and aching for a surf. So after raiding Ricki’s girlfriend’s kitchen we hit the road. 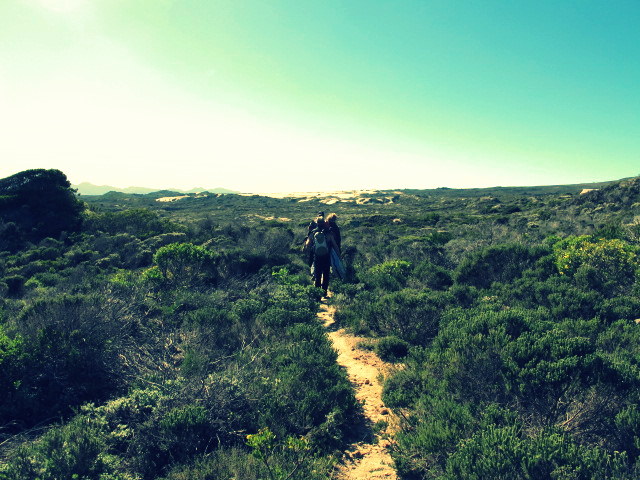 Taking the road most travelled, to a well-known spot famed for working on minimal swell and not minding the dreaded South-Easter. The initial rendezvous time was nine am, but when we arrived closer to ten Ryan didn’t seem to mind. He had his camera out and was trying to capture the futility of navigating the close-out which was the mid-tide beach break.

After brief hallos Ryan pitched his plan for the day. A plan we all listened to with trepidation, because he’s not famous for good calls in our surfing circles. He is, after all, the same guy who paddled out at ten to twelve-foot Bay View on a dinged up 6’2” with an old competition leash. (Needless to say that didn’t end well. In fact it ended with lots of swimming for him and lots of scrambling down cliff faces for those of us wise enough not to take a short board to a gun fight.) But let me not get side tracked, the announcement of his plan was met with scepticism on all fronts. The combination of a delicious, hangover busting, frankfurter and the close-outs in front of us, prompted us to give in to Ryan’s reasoning. 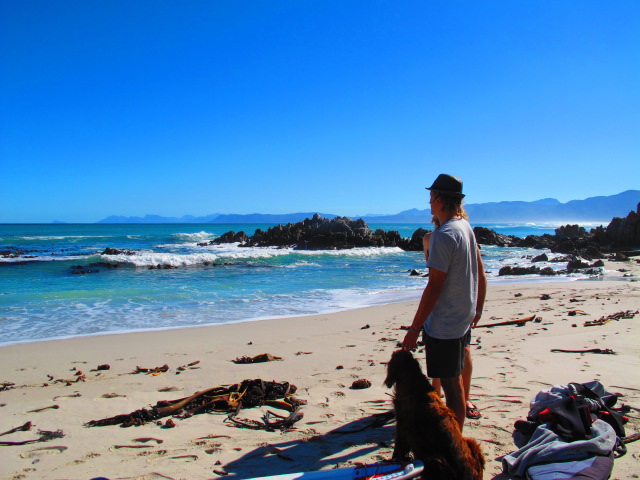 With a quick swapping of vehicles and retying of boards we were soon on the road again, driving away from any recognised surf spot, following the whims of man with questionable judgement. We weren’t to be disappointed though. When we finally crested the final rise, after what seemed an eternally long drive and a mission of a hike, the swell lines stretched neatly – like columns of well marshalled cavalry – across the bay. Impossible as it seemed, this magnificent anomaly was picking up swell even when there was none to speak of. Riding through the azure waters of the bay, the lines feathered in the light off-shore breeze before peeling off a series of rips and sandbars across the breadth of the cove. As close to perfection as one could hope to find on a beach break, and not a soul in the water… 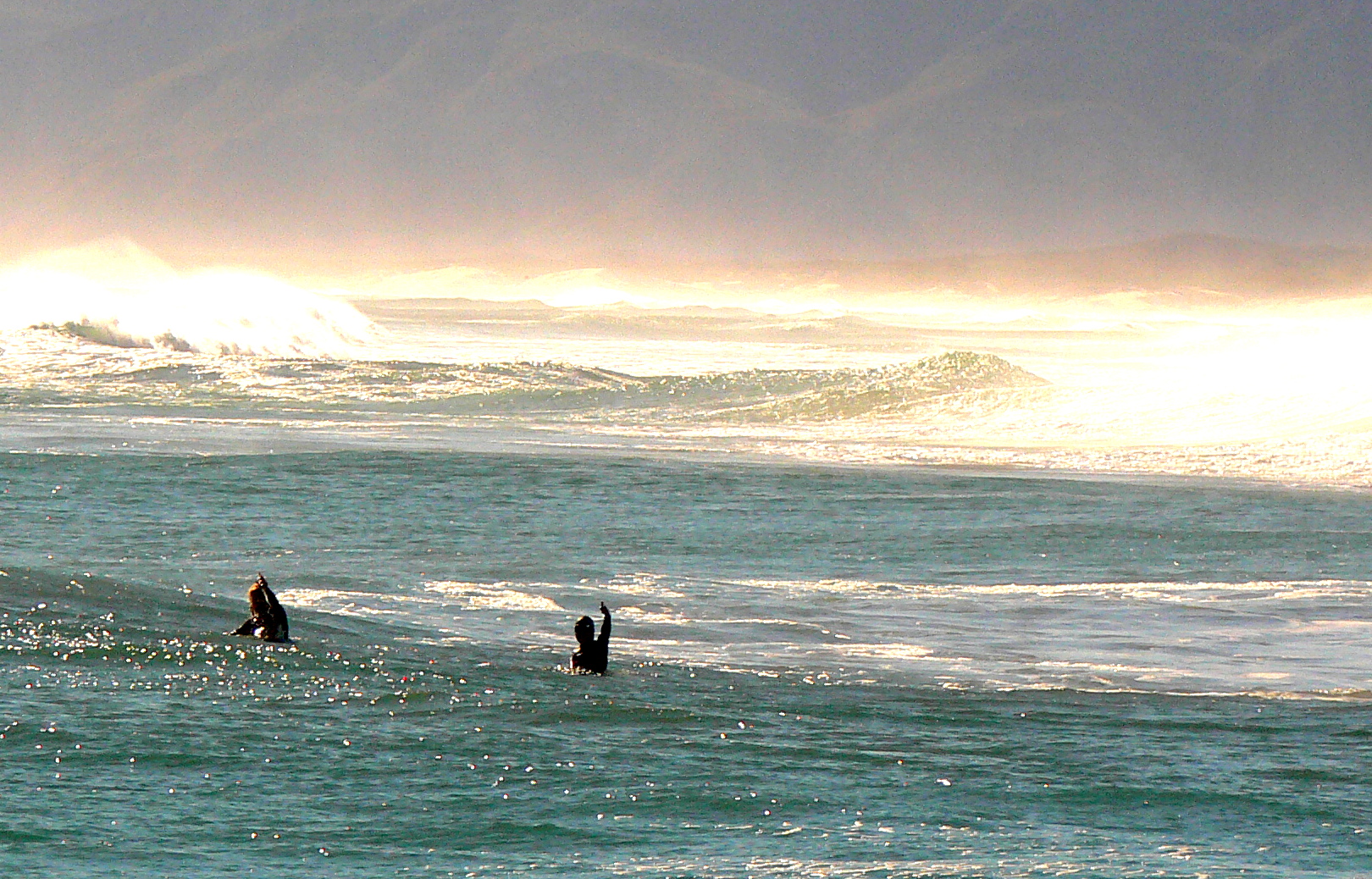 Ryan and I paddled out first, testing the heaving right running into the corner of the beach. The combination of the backwash and the shallow sandbank made it a treacherous but exhilarating take-off followed by a pounding as the wave inevitably shut down in one dramatic crash. After a few unsuccessful attempts at pulling into the close out we spied Bjorn eying the A-frame peak a little further down the beach and joined him on the sand waiting for Pat and Ricki to suit up. Mark meanwhile was not a happy camper, having been cornered by the local kids he’d had his head filled with stories of sightings of men in grey suits perusing the back-line like Americans at an all-you-can-eat buffet.

The rest of us put any thoughts of larger sea life out of our minds and made the most of the peak. With three goofy footers and two regulars in our little posse we could afford to be picky and were soon all catching the best waves we’d all had in quite a while. I for one managed to scrape onto a reeling left which ran nearly seventy five meters down the beach, begging to be hacked to pieces (something I completely failed to achieve). With the rip making the paddle a little difficult, every paddle back to the line-up offered an opportunity to see at least one of the others in action. And on one such occasion Ricki and I had front row seats for Ryan completing the first barrel ride of the day. On another Bjorn linked together an impressive sequence of turns, finally putting to rest the nickname of Boskak Basson, which he’d earned a few years before for his then less than aesthetically appealing stance. 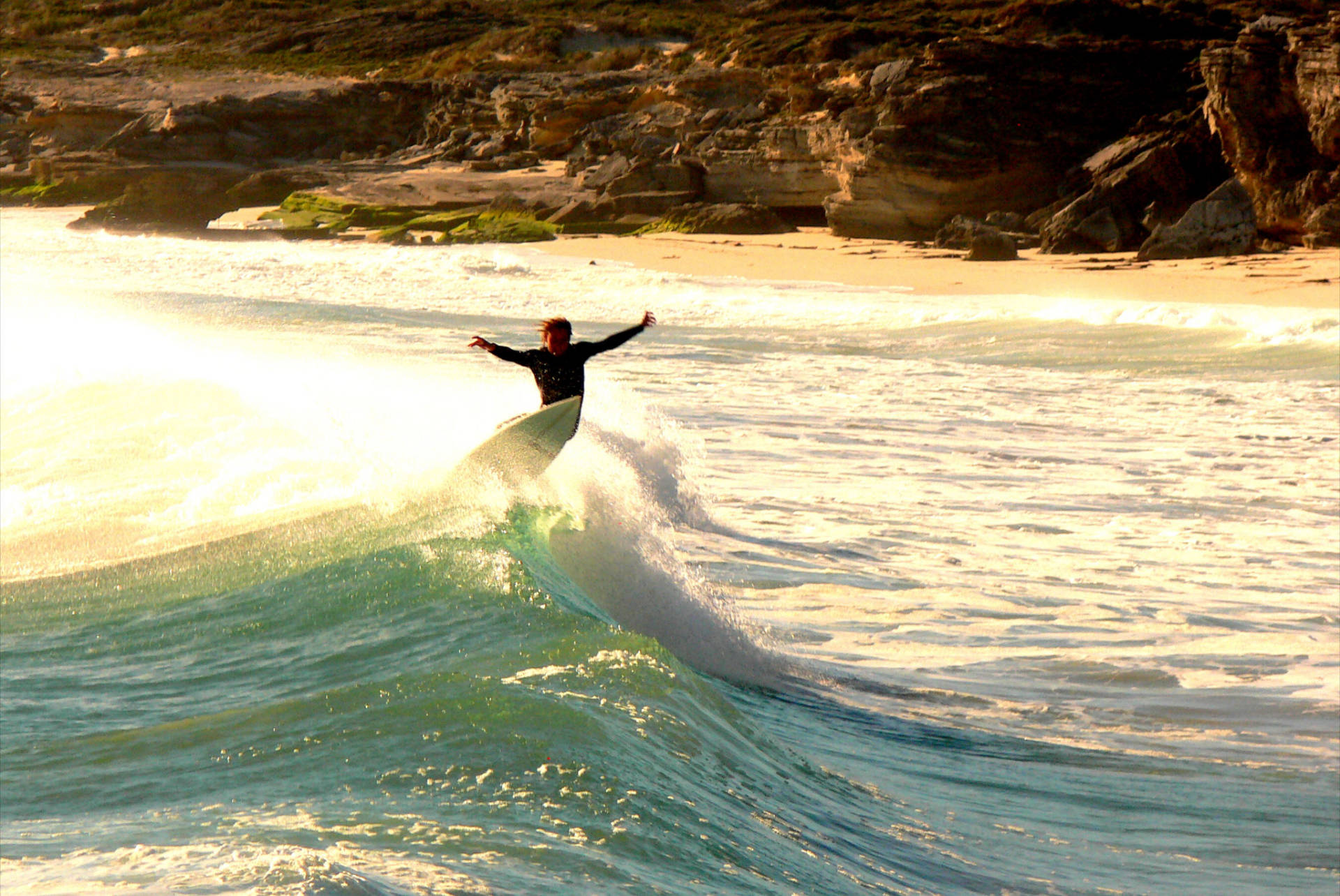 Eventually exhausted, we retreated to the beach to find Mark had given up on us and left. It didn’t dampen our spirits though and Ryan and I struck out for the car to fetch the camera while Ricki, Pat and Bjorn took to the right Ryan and I had attempted to master earlier. The dropping tide had done wonders for the wave, with the backwash now under control and the sandbar funnelling barrel after barrel into the shallows. Relishing the opportunity to put his barrel riding skills to the test on his forehand, Bjorn caught wave after wave. Ricki and Pat meanwhile were a little more circumspect, partially because they – unlike Bjorn who had snapped three boards and seriously damaged two more in the preceding month – were unwilling to put their hardware on the line. Ryan meanwhile had found a spot on the rocky outcrop flanking the bay and with the sun sinking towards the horizon behind the guys in the water was lining up for the perfect shot.

Time was against us and too soon Ryan called “last wave”, he had romancing to get to. After a bit of rock hopping we joined Ricki on the beach, as Bjorn and Pat waited for the perfect final wave. And then, right there in front of us Bjorn got the wave of the day. A head high beauty which just ran and ran, holding tantalisingly open as Bjorn stalled with his arm in the face, locked in the barrel for what seemed like minutes. The moment was so surreal that despite having his camera on Ryan failed to raise it to his eye, he like Ricki and I was powerless, unable to move, rooted, gawking at the  surfing pornography playing out before our eyes. 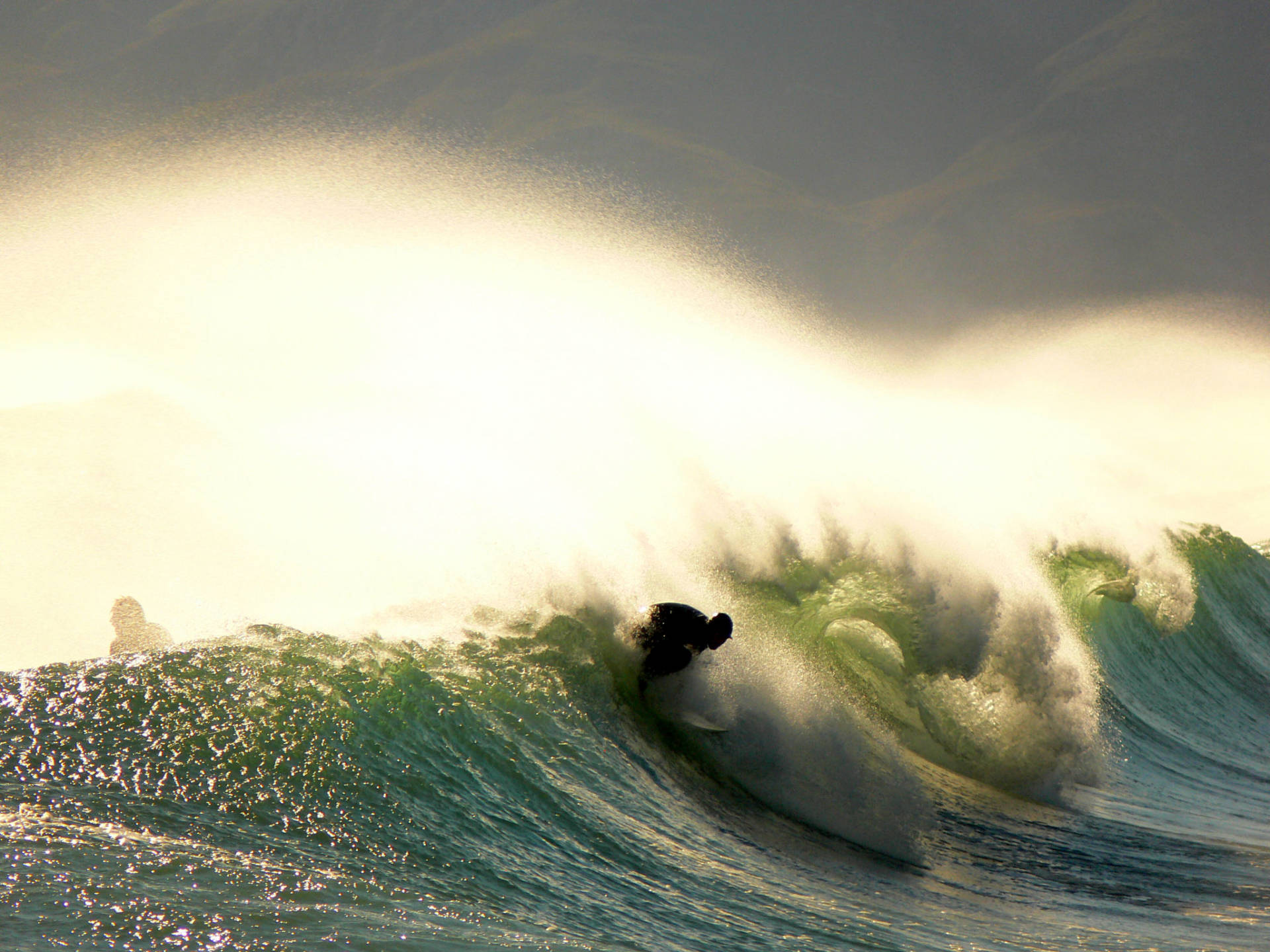 In surfing as in many other moments in life, these really perfect moments are best not captured on film for posterity. Photos don’t lie, they don’t allow for the subtle twists that the mind can play on memories over time. Yes, in future retellings the wave might get bigger, but the important parts will remain the same. We were there, just us five mates, surfing a semi-secret spot by ourselves in perfect conditions. No photo can capture that feeling, the knowledge that as it happened we were all sharing something which would live on in our memories. It would assume a life of its own, become a story to be told and retold. Because a photo might be worth a thousand words but memories like that, cannot be quantified… 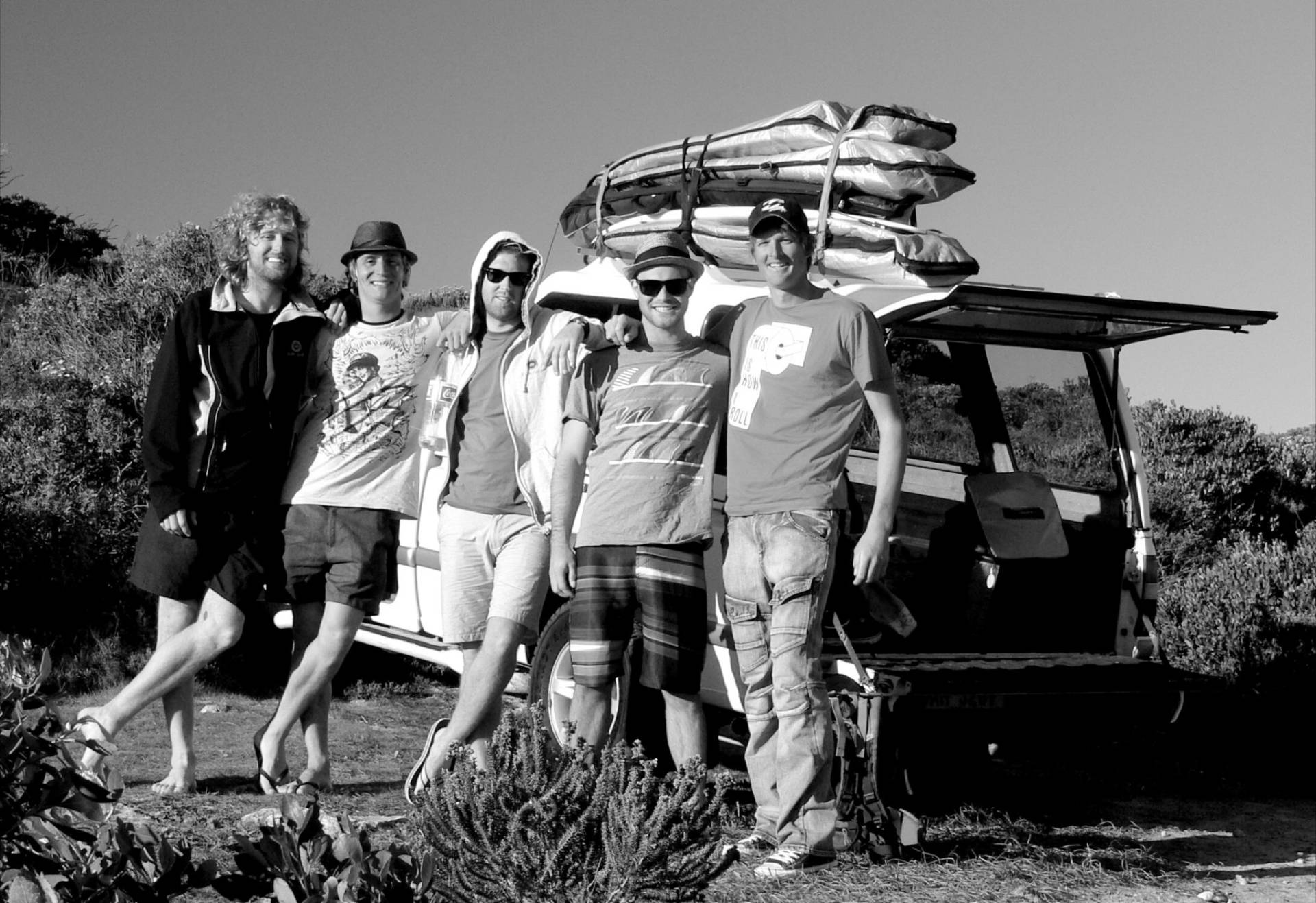 The boys, surfed out and stoked. Photo by Ryan Hill. 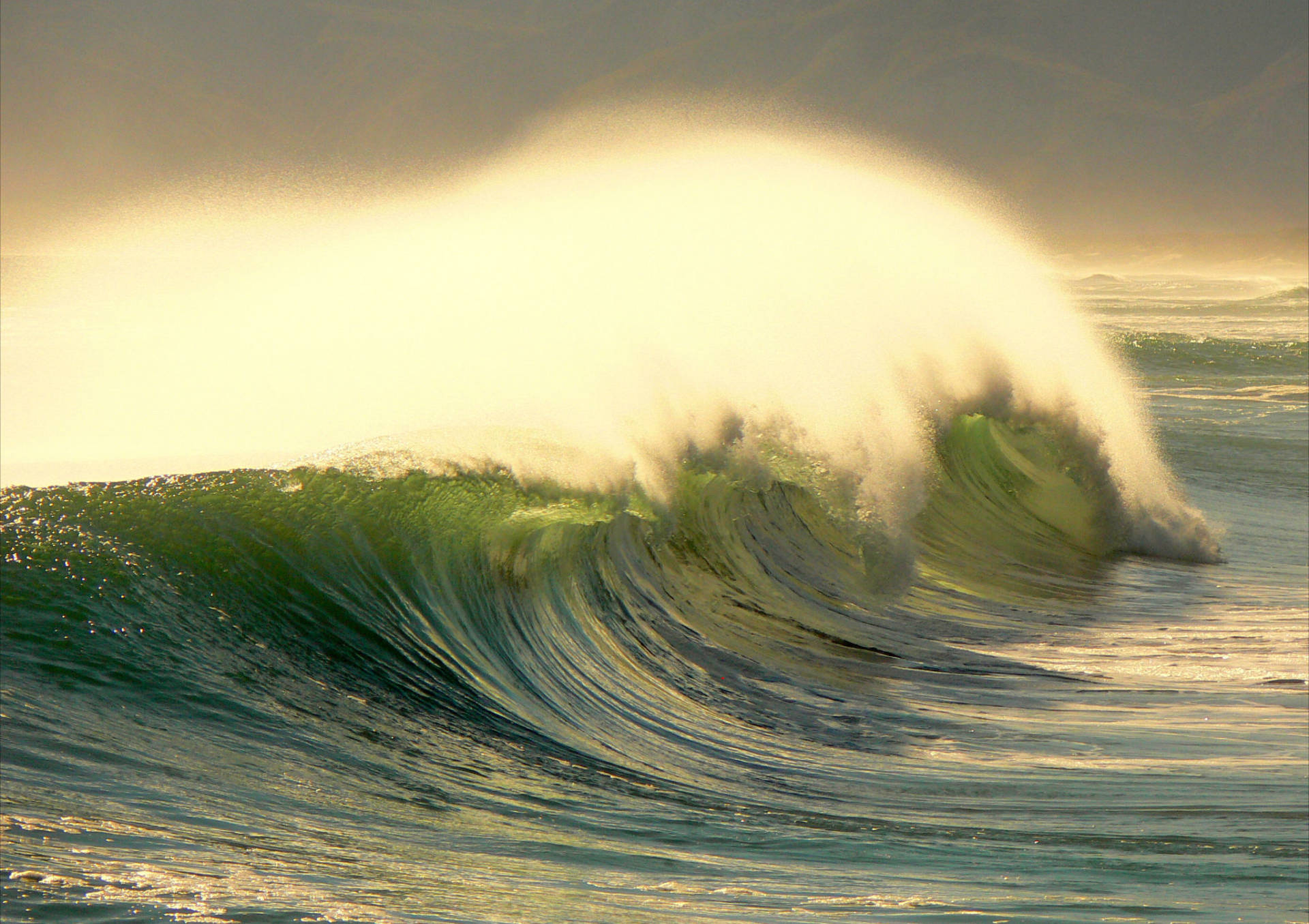