Getting out on a bikepacking adventure is as simple as packing a saddle bag, strapping a tent to your bike and throwing a few things in your backpack. Then all you have to do is hit the road, find a campsite and hope you don’t get eaten by a small mountain cat…

It was dusk already by the time I picked a campsite. It wasn’t perfect by any means. The ground sloped, significantly, down towards the river. But it was the only stretch within the little valley I’d prematurely committed to that offered a tent-sized patch of grass and sand, rather than prickly fynbos or rocks. So, I made do. 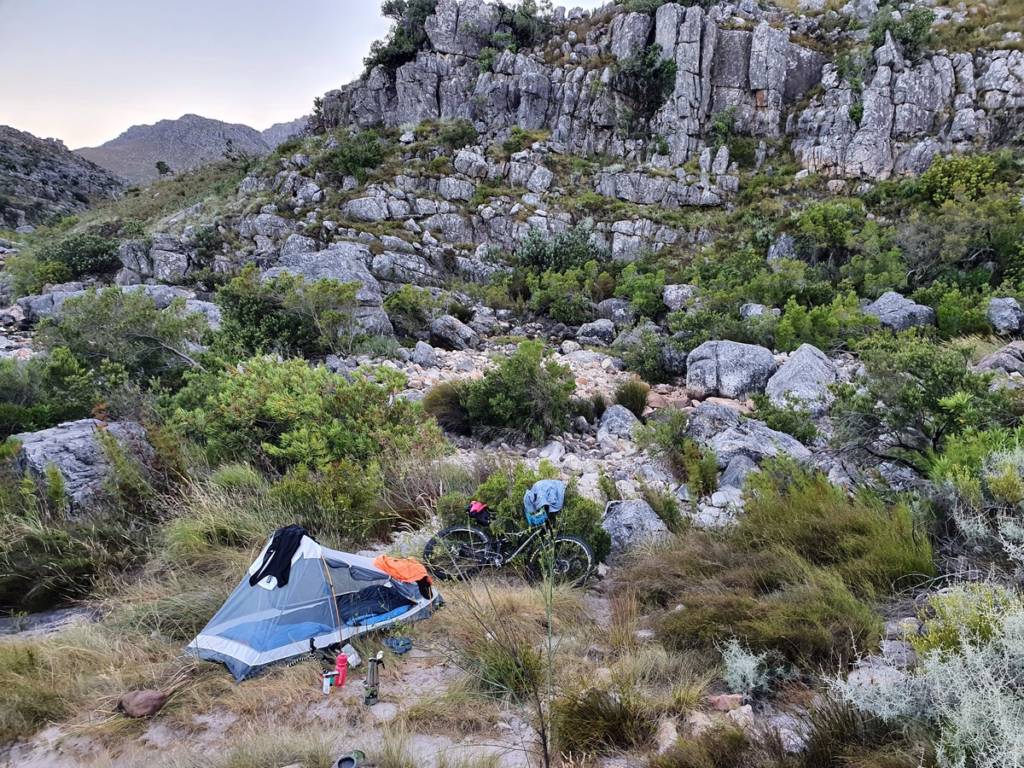 The wild campsite in the mountains.

I pitched my tent by bike light. Choosing to forgo the fly sheet as no rain was predicted overnight. It had been a brutally hot day. 33 degrees at 18:00, on the ascent of the pass, Instagram had informed me when I stopped to post about melting. But with the sun down and the last rays of red light reflecting off the cliffs across the river the air begun to, mercifully, cool. Soon a pleasant breeze was wafting fresh mountain air across my campsite.

Time for a swim… After a hearty application of mosquito repellent. 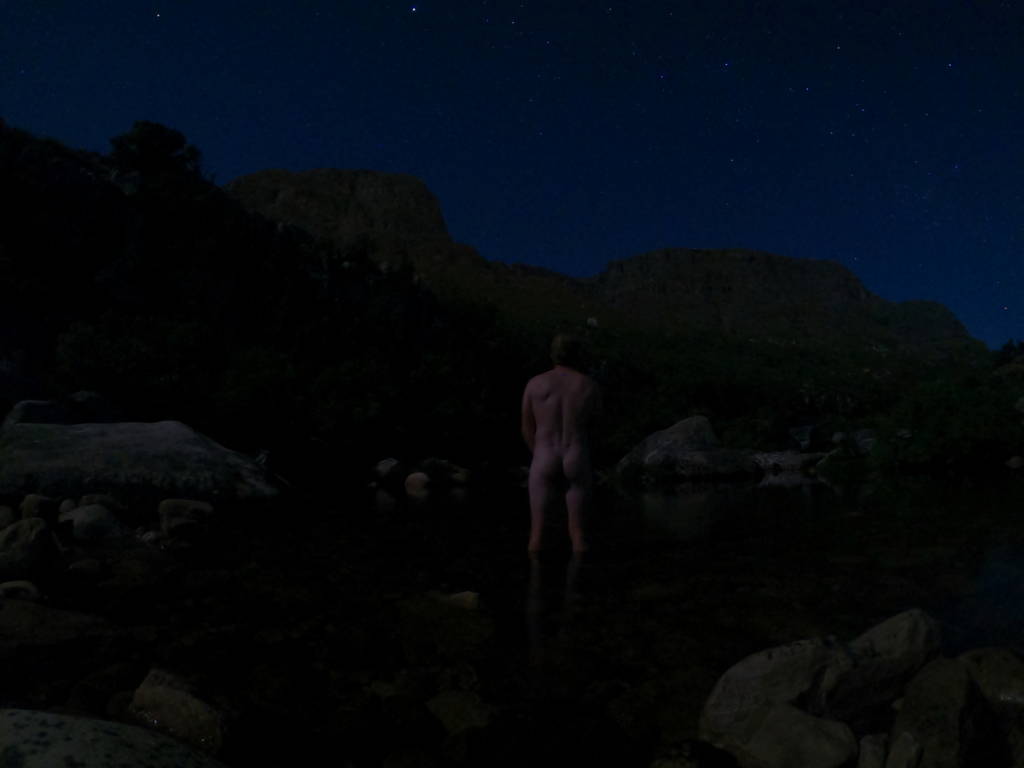 Night swimming, the only way one should on a solo bikepacking trip.

Making my way down to the river, across the smooth rocks was trickier in flip-flops and by headlamp light than I’d expected. Though if I’d chosen to leave the light and struggle at a slower pace, I’d probably have enjoyed a better night’s sleep.

As I stood on the edge of the pool – which was a shallow created by receding floodwaters, with a narrow channel of swift flowing mountain water on the far side – I cast the beam of my headlamp around. Across the river, what I discovered the next morning was no more than 25 metres away, the light picked out the unmistakable glow of cat’s eyes. 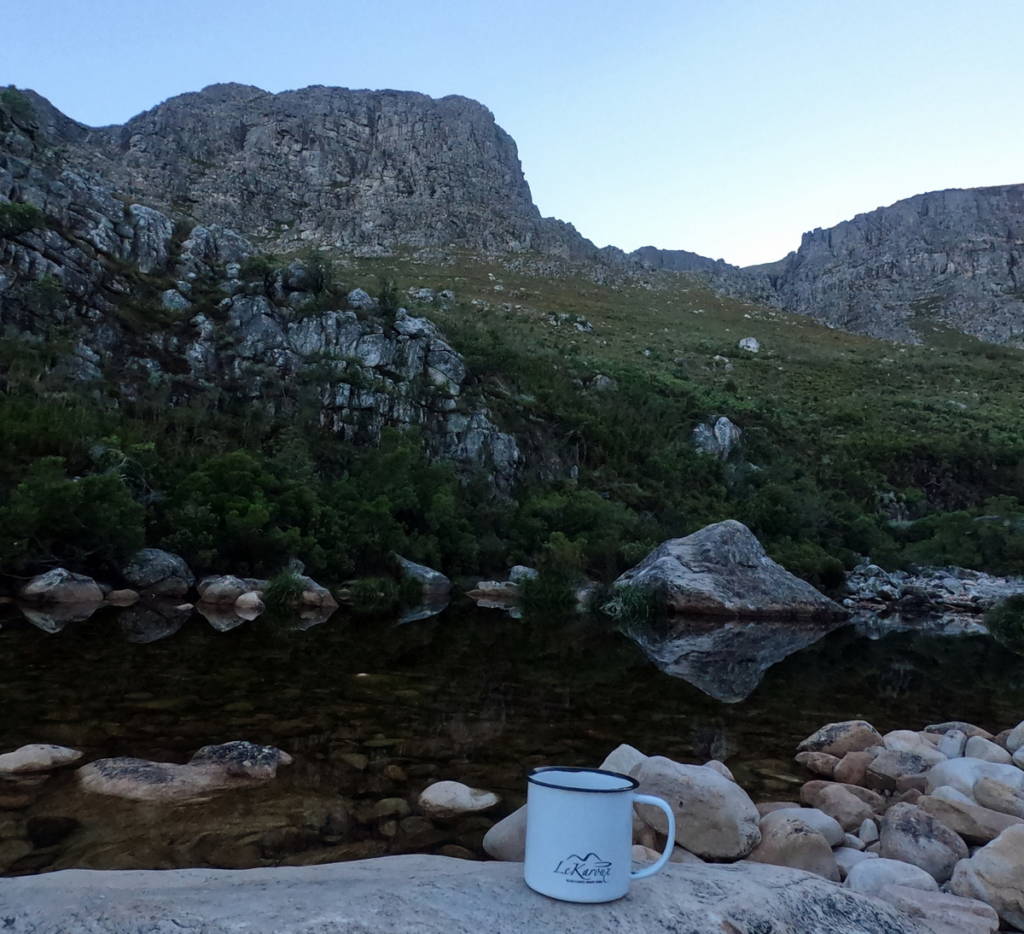 The next morning the distance across the pool seemed uncomfortably close. The cat had initially been on the lower slops of the triangular rock, before moving back and to the left, around the pool.

It was impossible to judge their height above the perch the feline had take up. But they reflected large and yellow. Bright, unblinking orbs against the dark vegetation beyond. Switching to high beam I hoped to identify the eyes’ owner. Was I dealing with a leopard, a caracal or something smaller?

The stare-down lasted uncomfortably long. Then the cat blinked and disappeared. I scanned the brush. Casting my light to left and right. Suddenly hyper conscious of every sound on the river bank. Leopards take antelope at water-holes all the time my memory involuntarily brought up. Crushing the logic that was trying to reassure me that it was far more afraid of me than I was of it. 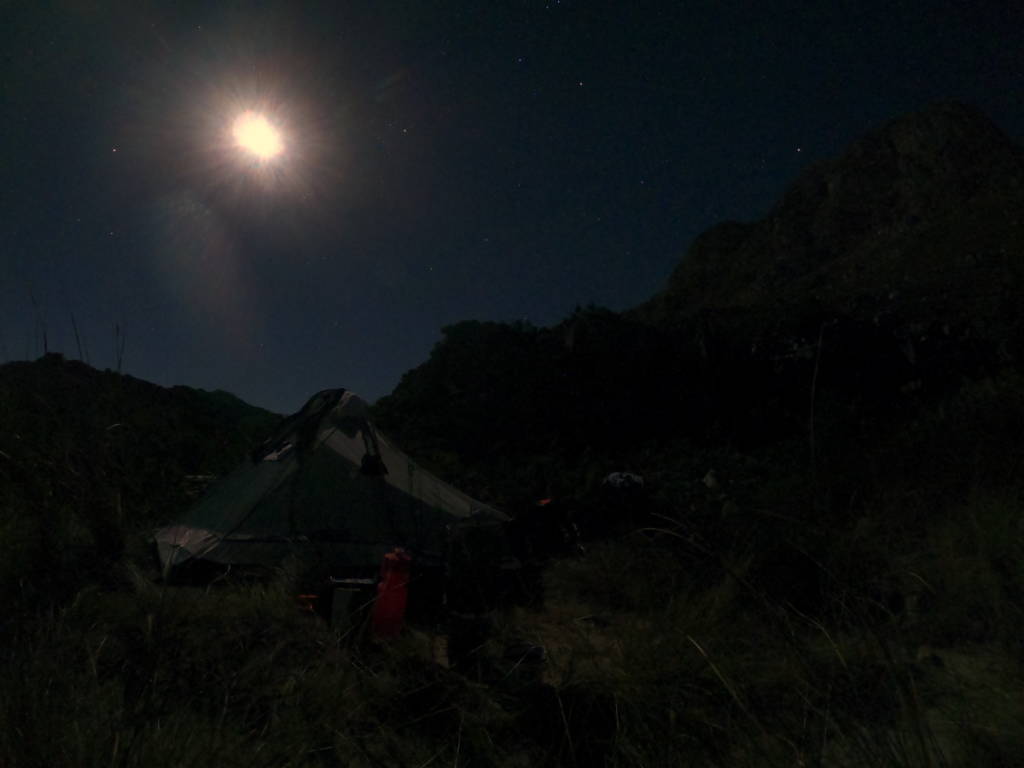 Logic is in short supply in the dead of night.

So afraid in fact that it hadn’t moved off at all! After a 30 second, or 5 minutes (I can’t say for certain which), search I locked eyes with the cat again. This time it was slightly further away, having moved backwards. But also, along the only viable route across the pool towards where I stood…

Again, we stared at one another. Then it blinked, turning as it did so. Continuing its circumnavigation of the pool, my ancient DNA assured me. Fleeing for safety, logic vainly tried to counter.

My last glimpse of it confirmed it the latter. Another 30 seconds/5 minutes of scanning the bush produced just one final sighting. Half way up the far bank of the river, stealing a last glance down at the interloper which spoiled its quiet evening. 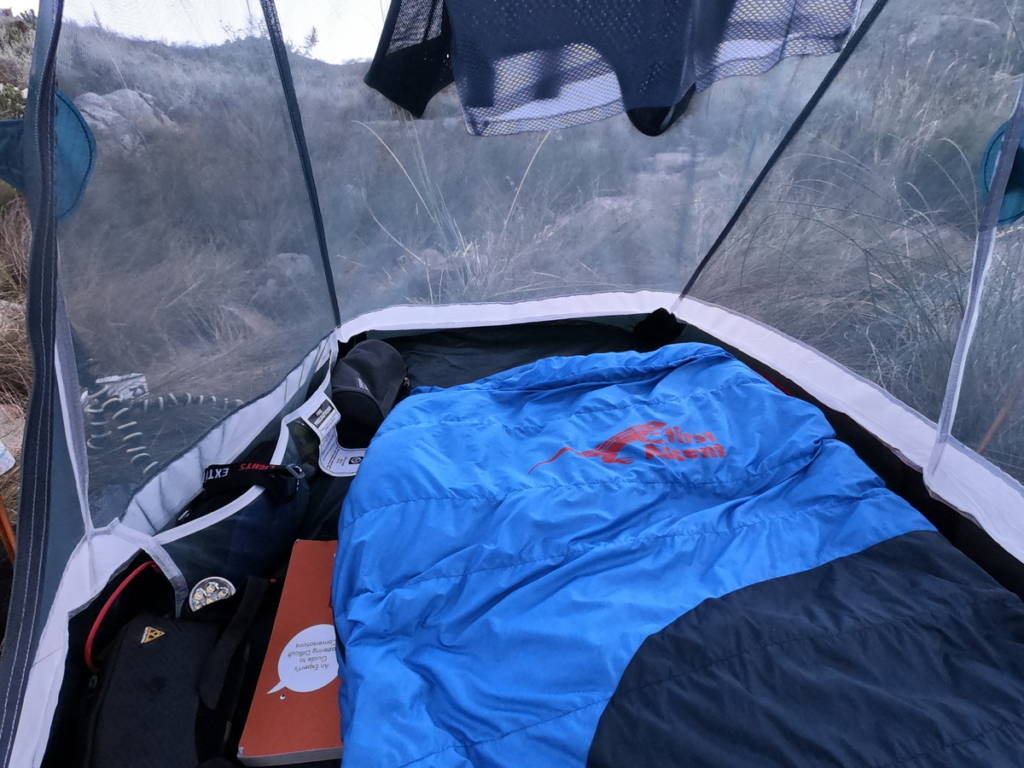 Only the thin mesh of the tent to offer any protection of wildlife, real or dreamt.

Needless to say, my night was filled by strange dreams. And restless tossing to the cacophony of barking baboons far up the river. Perhaps it was a leopard after-all then, whose interest for something roughly bipedal had been peaked? That would have been some story if it were so…

Chances are though that it was a caracal coming down to the river to catch birds or bats swooping for insects above the water. The next day, after dreaming of a lioness wondering through my camp, I went to check for spoor. Broad, weather worn, sandstone shelves left no clue as to what it could have been. Though the distance between where I had stood and where the cat had crouched under a low tree was uncomfortably short. A bound and a hop for a lithe animal. While I stumbled through the shallows treading carefully on smooth, algae covered, river rocks taking minutes to cover the same distance. 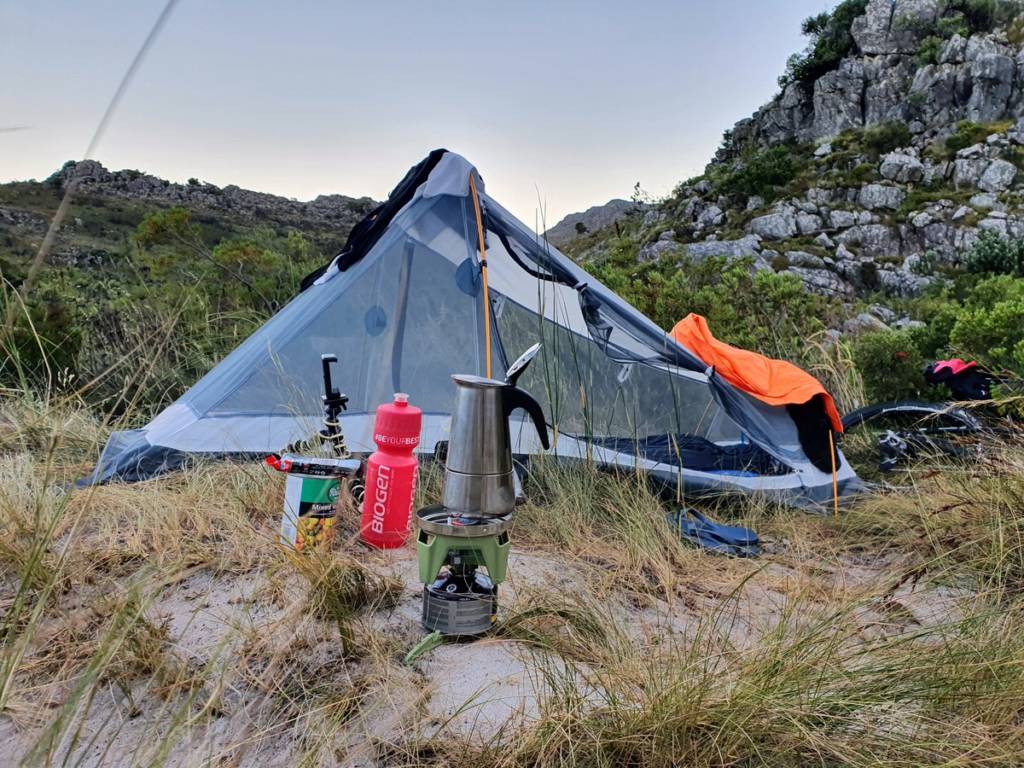 Made it through the night and bolstered by coffee it hardly seemed so harrowing.

American outdoorsman and writer, Steven Rinella always used to say (before he and a film crew were charged by one) that he would like to be lightly mauled by a brown bear. Not to be severely injured, but so he could tell the tale. And while I was relieved to see that cat moving off, part of me now wishes for a more dramatic conclusion. A brief scuffle, a scratch or two. Something to turn into a scar and a fireside story.

Instead, I had to be content with packing up my camp. Reattaching my gear to my bike and pedalling back down the pass. Reflecting on the night over coffee at a road-side café I couldn’t help but be disappointed in myself. The discomfort of sleeping on uneven ground was far outweighed by the paranoia drummed up by a small mountain cat. Clearly, I need to spend more time sleeping in the wild and going on solo bikepacking trips so I can learn to supress those irrational fears. 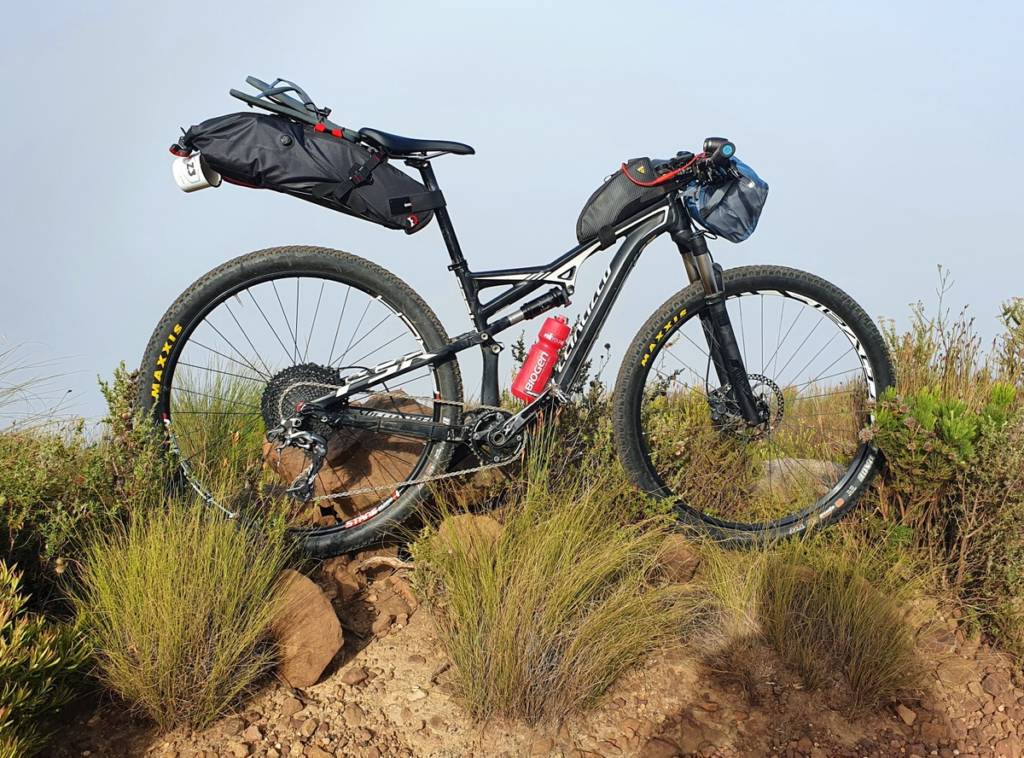 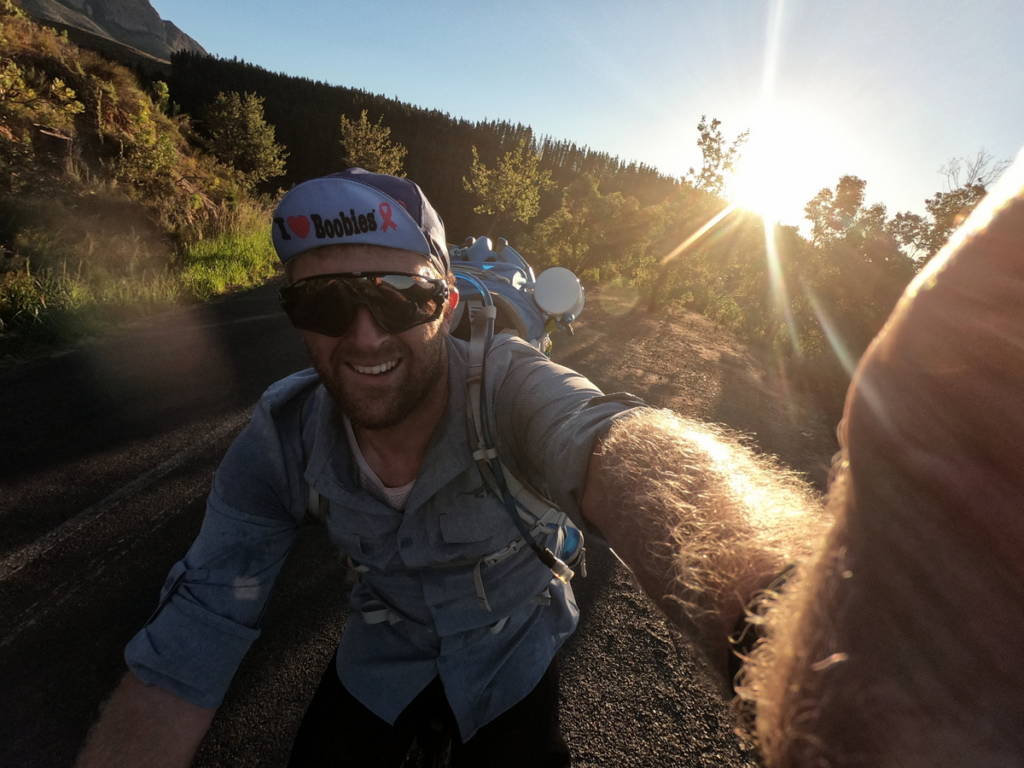 You don’t have to ride far to make it a bikepacking adventure. Just a short jaunt into the wilderness will suffice.