There are few mountain biking events in South Africa which better encapsulate the nation’s cycling spirit than Trans Baviaans. In a country obsessed with ultra-endurance events Trans Baviaans long ago became the Comrades Marathon or the Midmar Mile of mountain biking. Its 230-kilometre route, through the largest wilderness area in the country, provides a challenge which requires dedicated training, mental fortitude, wise equipment choices and canny nutrition to conquer.

Former winner and former course record holder, Timo Cooper and his partner Koos Uys will start with number 1 on their bikes. The Coopetto team will be up against the Super Troopers, Vickus Boshoff and Theo Otto; the Young Guns, Niel Zietsman and Erick Heyns; Karoo’s Wayne van der Walt, Philip de Klerk and Eugene du Plessis; as well as CrankItUp’s Terence Hope and Evan Robson. Andre Visser and Jeandre van Schalkwyk, of OdorCure, and the Elaleni Dream Team, of Bryan Taylor and Mark Olivier, are also teams to watch. That said, there are three elite men’s teams which are sure to attract the most attention. They are the Uncle Fish, DriveTrain Isibindi and The Prancing Thunder Pixies squads. 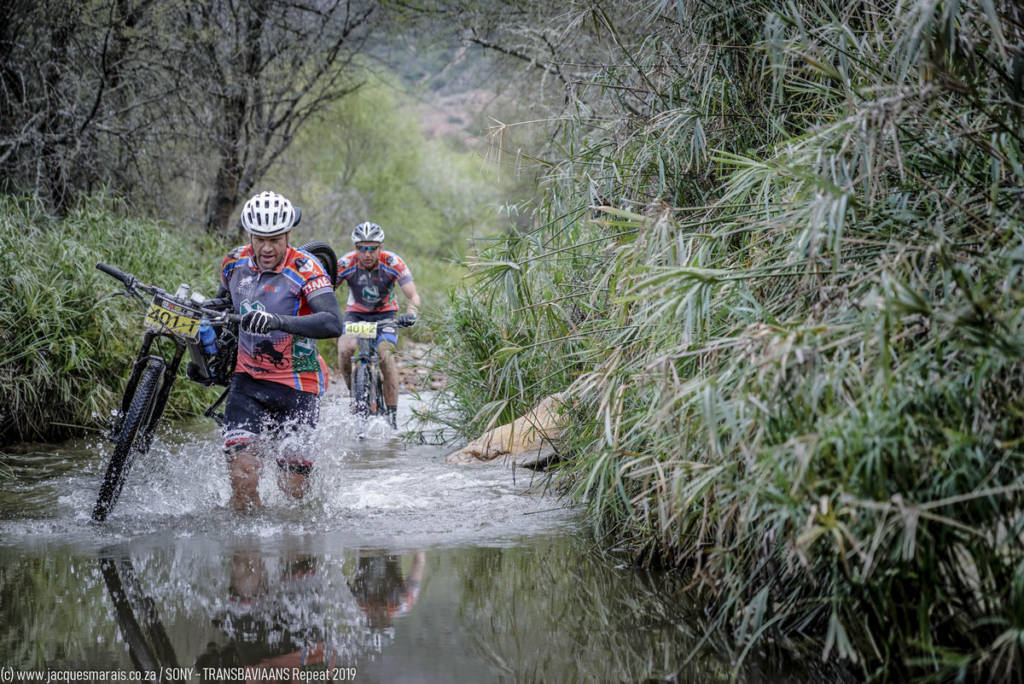 The infamous Langwater river crossing, after Check Point 3, could be shallower than usual this year, after a dry winter in the Baviaanskloof. Photo by Jacques Marais.

Uncle Fish is a three-man team, made up of long-time team mates Gawie Combrinck and Nico Bell. They will be joined for the Trans Baviaans Race by Gerrit de Vries. In 2019, the last time the Trans Baviaans was held, Combrinck and De Vries raced to victory in the Repeat, in a highly credible time of 9 hours 25 minutes and 20 seconds. Though Combrinck was quick to assure their rivals that “Gerrit [de Vries] and I will just be happy to hang onto Nico [Bell’s] wheel. We’re just going, to enjoy the ride.”

When the elite teams, which include the elite men, elite women and elite mixed squads, start – at 08h00 – on Saturday morning the competitive juices are sure to flow in the Uncle Fish team. As they will in Joel Stransky’s DriveTrain Isibindi team. Stransky and Tony Lindsay are as unlikely as Combrinck and Co. to let anyone easily ride off the front of a compact, 21 team, elite group.

The final elite men’s team to watch are The Prancing Thunder Pixies. Dane Walsh is one of the legends of the Trans Baviaans having taken part in every edition of the event, since it was founded in 2004. Throughout the 16 editions he and Craig Edwards have seldom been outside the top 10. Their real contribution to the race has arguably been their humorous accounts of the races, written by Walsh and published on his Velo Tales blog, though. Their stories read like a how-not-to guide for the Trans Baviaans. For 2021 they have roped in Michael Baker as a third partner in mis-adventure. 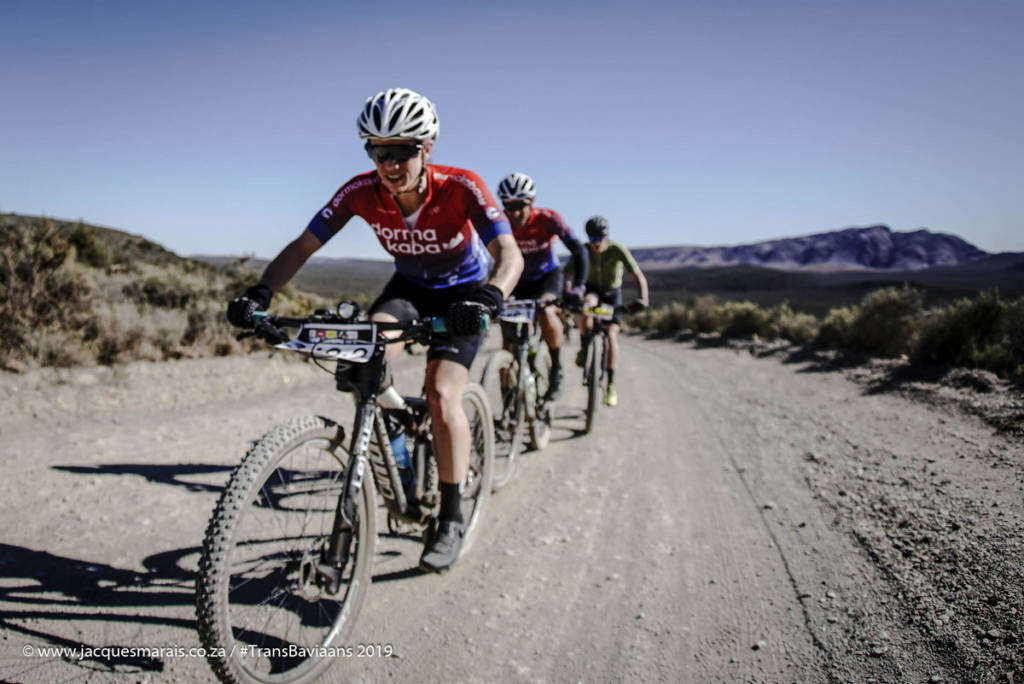 Where teamwork gets a whole new meaning is one of the slogans of the Trans Baviaans, and over the 230km race distance the support of a good teammate is certainly essential. Photo by Jacques Marais.

In the mixed category the race is likely to be contested by the perennial mixed champion Yolande de Villiers. The South African Marathon Champion will be partnered by Dirk Coetzee, for Coopetto/Darvin Trust, in 2021 and will be up against fellow Oudtshoorn residents Fienie and Kobus Barnard. The Barnards are riding as Giant/Liv. A third team who may upset the mixed category favourites are the IDK combination of Brigitte Joubert and Izak Strauss. 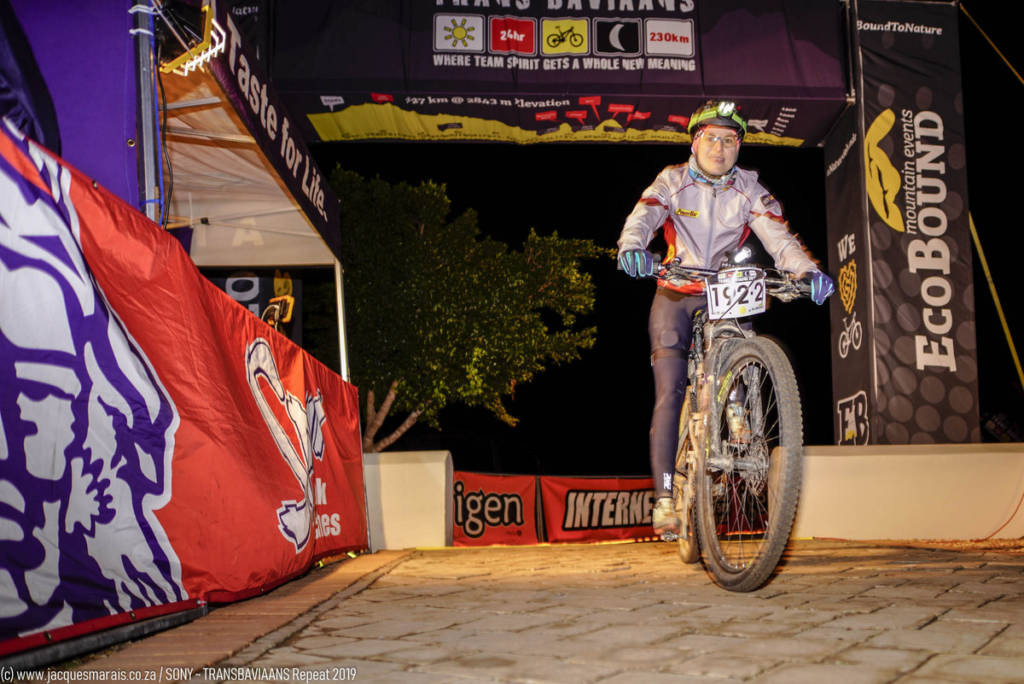 With rolling starts from 5am, in Willowmore, and the elites starting last at 8am there are sure to be more riders than ever finishing before sunset at the Fountains Mall, in Jeffreys Bay, this year. Photo by Jacques Marais.

Mountain biking fans can follow the Trans Baviaans on the race’s social media handles. Cell phone reception is limited in the Baviaanskloof so updates will be sporadic through the mid-phases of the race, but the shift to a 08h00 start time for the elite teams means the decisive action is likely to take place in the late afternoon rather than early evening. Tune in by following @transbaviaans, on Instagram, liking the Trans Baviaans 24HR MTB Race Facebook page and following @EcoBoundEvents, on Twitter.