Muddy Repeat of the Trans Baviaans

Muddy Repeat of the Trans Baviaans

The 2022 Trans Baviaans Repeat took place in challenging – if not quite as cold as the Race, the weekend before – conditions on Saturday, 20 August. Yet, rain still fell, the wind still blew and riders were subjected to a muddy finale after a wet 24 hours in Jeffreys Bay before their arrival. It had looked like it was going to be so much worse though…

Following in the muddy tyre tracks of the Trans Baviaans Race, which took place on the 13th of August, the initial weather predictions for the Repeat were for rain and icy temperatures. As the weekend drew nearer the predictions mellowed. However, every rider in the field had seen or heard of the carnage the weekend before. Never had so much waterproof gear or thermal apparel made its way to Willowmore. 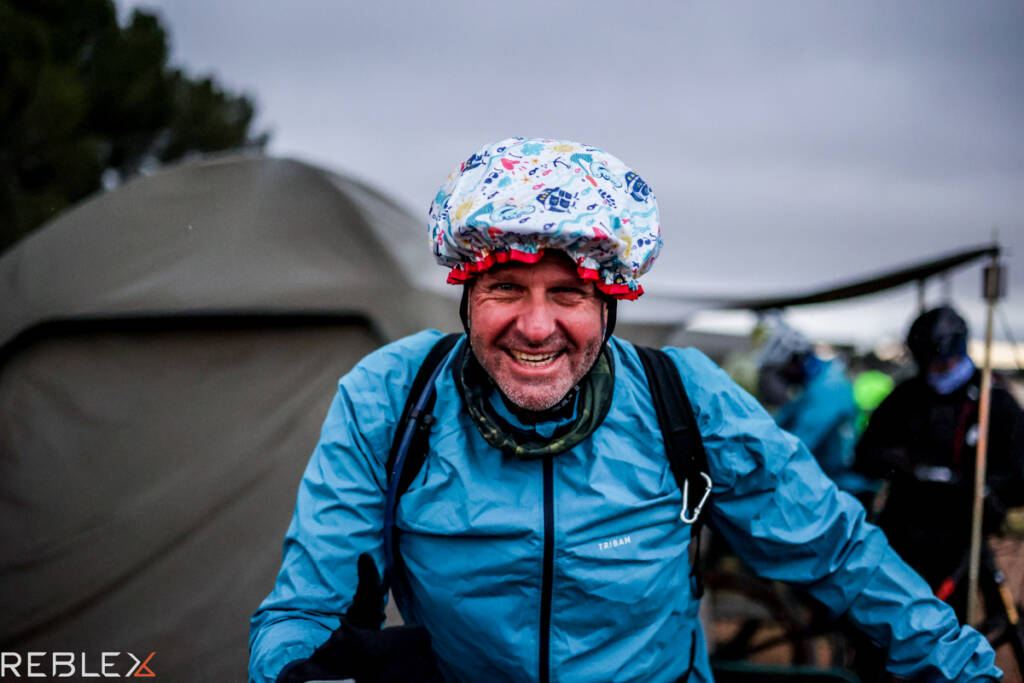 There were a few creative solutions to remaining dry on display before the start in Willowmore. Photo by Llewellyn Lloyd / Reblex Photography.

Setting out into the Baviaansklof for the 230 kilometre traverse of the country’s largest wilderness area nobody was unprepared. Fully waterproof jackets were the norm, only a few brave souls started in lightweight windbreakers. Many riders donned dishwashing or surgical gloves over their riding gloves. Most wore overshoes or had the tops of plastic bags peeking out the top on their cycling shoes. There were even teams bedecked in shower caps and one squad who cling wrapped their lower legs.

It was wild. The mercury remained resolutely around the 8 degree mark for much of the day and only briefly flirted with double figures. The rain spat in sporadic drizzles, but never fell consistently. This helped tremendously. Where Check Point 1, at Vero’s Restaurant, had seen scores of riders withdrawing the week before, for the Repeat sprits were high. Hands were still warmed at the fires, while roosterkoeke were wolfed down. 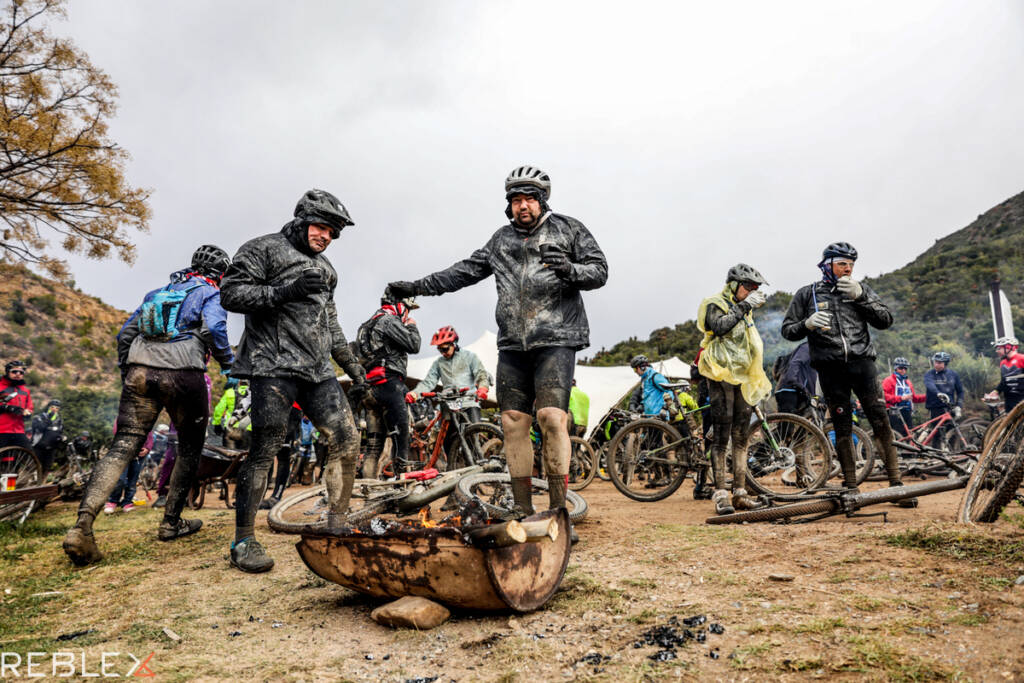 Vero’s Restaurant, which doubles as Check Point 1, returned to its traditional role as a brief stopping point before racing into the heart of the Baviaanskloof. Photo by Llewellyn Lloyd / Reblex Photography.

Then it was onward to Zandvlakte and Check Point 2. With freshly graded roads and a steady tailwind the speeds through the 50 to 100 kilometre stretches of the route were high. It was only upon reaching the Baviaanskloof Nature Reserve that the surface roughened up and the pace slowed. Baviaans Back the Fangs and MAC all took their toll and Bergplaas, at the 140 kilometre mark, was a welcome oasis before the descent into the storm ravaged coastal plane.

From Bergplaas the race down the Big Dipper and into the indigenous forests of Poortjie was particularly spectacular, although the week’s rain meant more frequent and fuller water crossings. Fortunately, even by the time the fastest teams reached Hadleigh – 170 kilometres into the Repeat – the predicted south westerly wind had died down. The evidence of its earlier gales littered the road up the Neverender however. Small branches and leaves littered the road, and in one spot an entire small tree had been blown half into the route. 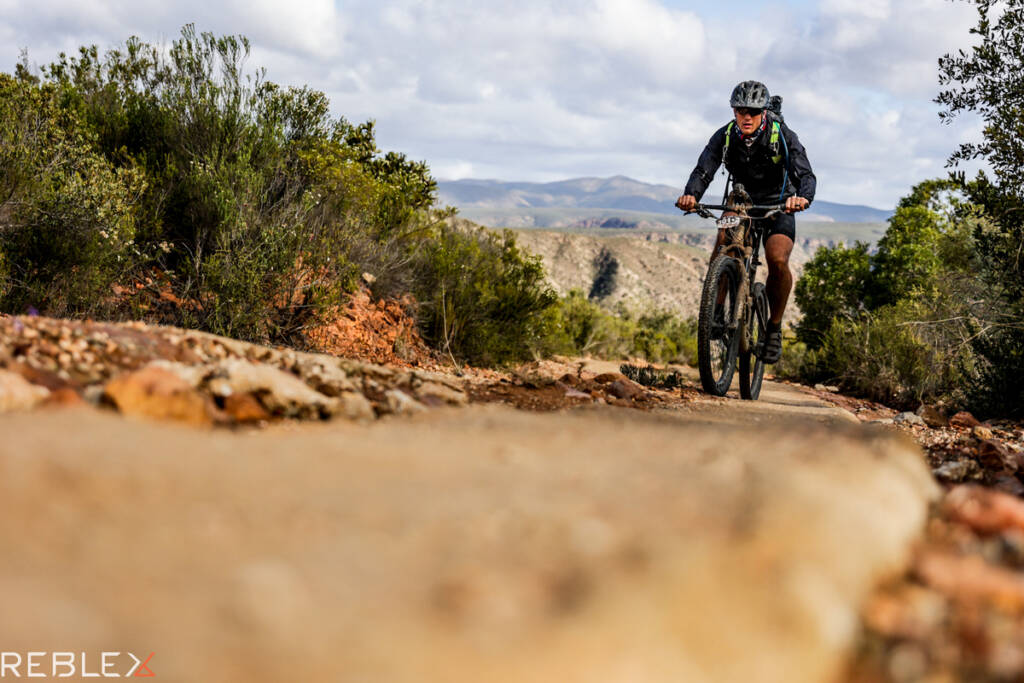 Though the conditions were better than the week before the temperature remained low throughout the Trans Baviaans Repeat, as such not even the 10 kilometre long Mother of All Climbs could force the stripping off of layers. Photo by Llewellyn Lloyd / Reblex Photography.

Knowing that the wind which caused all that damage would have been a head wind took the sing out of the muddy surfaces leading to the final check point. Then, on the farm roads between Zuurbron and the summit of Mini MAC the road turned to a quagmire. Gone were the firm surfaces below and muddy top layer. For 6 agonising kilometres in the final 30 riders had to grind through the mud. Some resorted to walking, carrying their bikes. Others, resigned to the damage 230 kilometres in muddy conditions had already done to their drivetrains, rode on.

At the sharpest end of what was a fairly relaxed event Team Sparkles were anything but slow and steady. Dean Hof and Bruere Klopper managed a credible time of 10 hours and 33 seconds. This was 48 minutes and 31 seconds quicker than Team LOT’s Pieter Henderson and Louis Otto in second. The Smithmeisters a further 11 minutes back. The times say more about the conditions than they do about the competitiveness of the racing however, it was a war of attrition out on the roads to Jeffreys Bay. 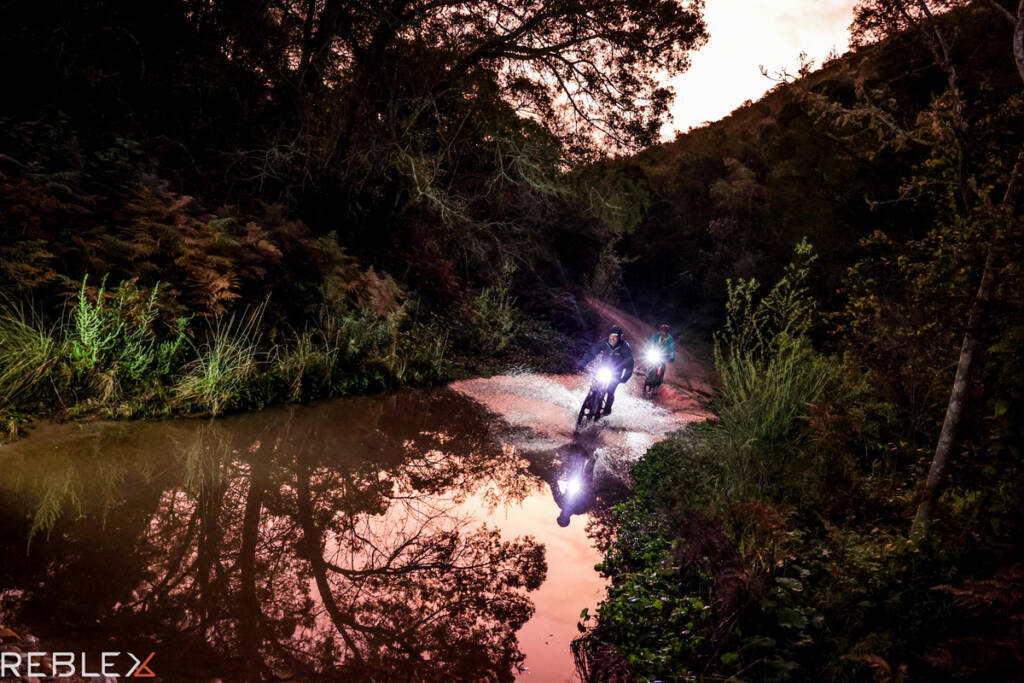 On the south eastern side of the Baviaans Mountains conditions became tougher with muddy roads and more river crossings slowing the average speed. Photo by Llewellyn Lloyd / Reblex Photography.

In the women’s Tanya Schutte and Illiske Verwey were 87 minutes faster than their nearest rivals, while Nix Walker and Reece McDonald were just 8 minutes and 26 seconds quicker than Team Lightning in the mixed category race. The Mortimer Toyota team, of Emile Cronje and Werner Martin won the masters race, in what is always a fiercely competitive category.

The 2022 Trans Baviaans series of events may have been some of the most challenging editions in recent memory, but the spirit shown by all those that completed the races from Willowmore to Jeffreys Bay was truly astounding. It is that same indominable spirit which keeps riders coming back to the events year after year and that is why EcoBound honour each five- and ten-time finisher with a commemorative shield. This year a total of 98 riders joined the five-year club and 5 joined the ten. While Dane Walshe became the only person to completed every edition of the Trans Baviaans Race, riding his eighteenth edition this year.

To recap on all the adventures from the Race and the Repeat visit www.transbaviaans.co.za, or like the Trans Baviaans 24HR MTB Race Facebook page and follow @transbaviaans on Instagram. Entries to the 2023 events open on December the 1st. 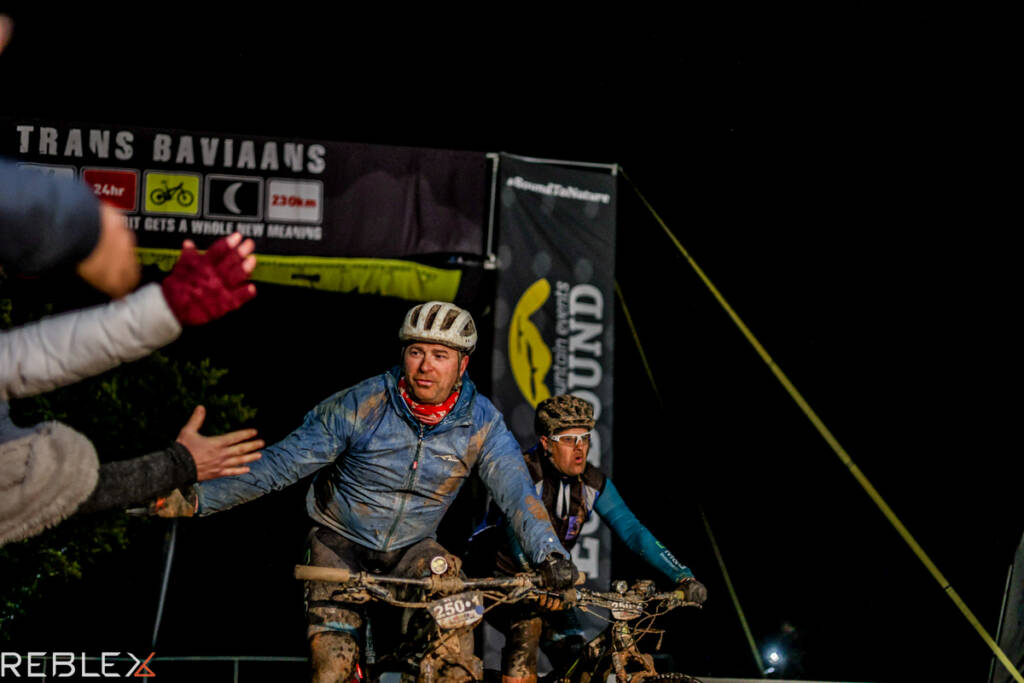 As with the Race, every rider who finished the Trans Baviaans Repeat earned their finishers’ medal by overcoming challenging conditions as well as the famously arduous route. Photo by Llewellyn Lloyd / Reblex Photography. 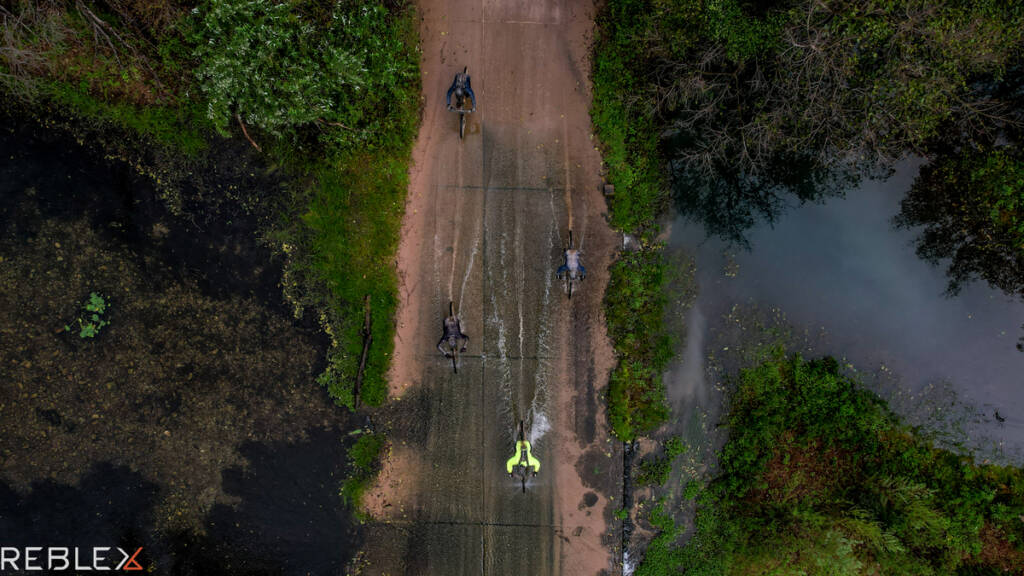 Much needed rain ensured that the drought-stricken region saw increased waterflow through the rivers of the Baviaanskloof for the first time in a number of years. Photo by Llewellyn Lloyd / Reblex Photography. 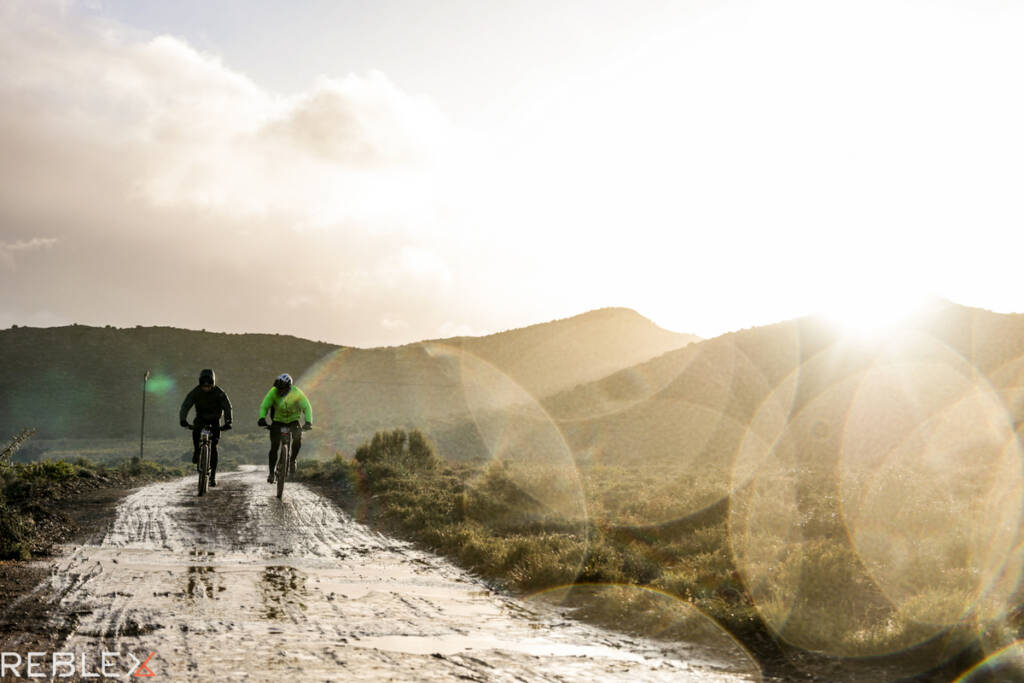 Despite the rain the road surfaces were good for 180 of the 230 kilometres of the route. Photo by Llewellyn Lloyd / Reblex Photography.