Uncle Fish Swim On, While Others Flounder in the Muddy Baviaanskloof

Uncle Fish Swim On, While Others Flounder in the Muddy Baviaanskloof

The 2022 Trans Baviaans Race was among the most brutal events in recent memory, due to icy rain and cold temperatures. Every rider who finished, be it on Saturday afternoon or in the late hours of Saturday night and Sunday morning, can thus be very happy with their effort. There are of course those who went faster, reaching Jeffery Bay, from Willowmore, earlier than the rest. In the men’s race that team was the Uncle Fish outfit, while Team Madmacs/Coopetto/Davin Trust dominated the mixed category and Action Cycles won the women’s race; on 13 August.

Inclement weather dominated early hours of the race. Though that is certainly downplaying the conditions. The chill factor was greater than it had been in 2021, when the mercury dropped to negative four. Persistent rain fell from well before sunrise, ensuring the temperature only rose into double digits around lunch time. In the first 50 kilometres of the route, there were mass withdrawals.  With riders suffering from the cold, especially those that stopped in the hopes of warming up at Check Point 1, many turned back or waited for lifts out of the Baviaanskloof back to Willowmore.

It was a brutally tough edition of the Trans Baviaans. Photo by Llewellyn Lloyd / Reblex Photography.

The leaders were not immune to the cold. “Nico [Bell] punctured and while we were stopped, so he could fix it, Gerrit [de Vries] began to shake uncontrollably,” Gawie Combrinck recounted. “He couldn’t even get his glove back on. All we could do was keep riding, so he could warm up a little.”

Combrinck and his Uncle Fish teammates did just that. They gradually reeled the pace setting Yolande de Villiers and Drikus Coetzee as well as Pitstop Sport team, of Conway Oliver and Malcolm Isaacs. De Villiers and Coetzee, who were also leading the mixed category, were the fastest team to Check Point 3, near the 120 kilometre mark. Despite a handy advantage Madmacs /Coopetto /Davin Trust left the check point, at Smitskraal, with Uncle Fish and Pitstop Sport in tow. Their lead reduced to nothing when Coetzee had to have new brake discs installed on his bike. 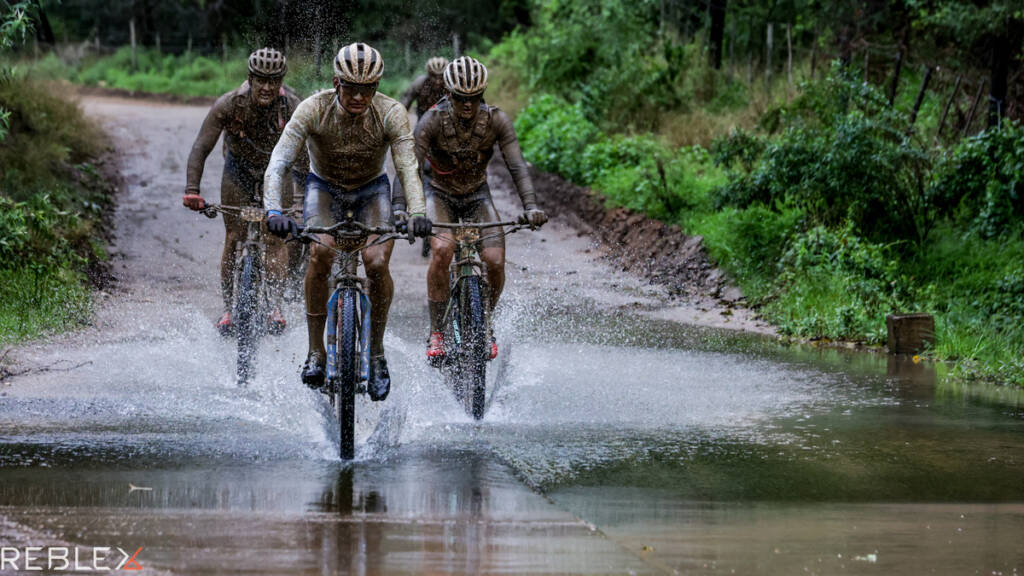 Over the next 20 kilometres the Uncle Fish team laid the foundation for their victory. Not that their race up the MAC was without incident. Combrinck broke a pedal and had to make running repairs at Bergplaas, which did not cost him or his teammates, Bell and De Vries, too much time. “Look, in terms of one day races in South Africa Trans Baviaans is right up there with the toughest,” Bell exclaimed on the finish line. Before Combrinck added: “I’ve been colder on the bike. But that was in Korea and there was snow next to the road!”

Having finished as runners up in 2021 Combrinck, Bell and De Vries went one better in 2022. Though the conditions meant their winning time – of 9 hours, 43 minutes and 49 seconds – was 100 minutes slower than their time the year before. They were 16 minutes faster than De Villiers and Coetzee; and nearly 40 faster than Oliver and Isaacs. 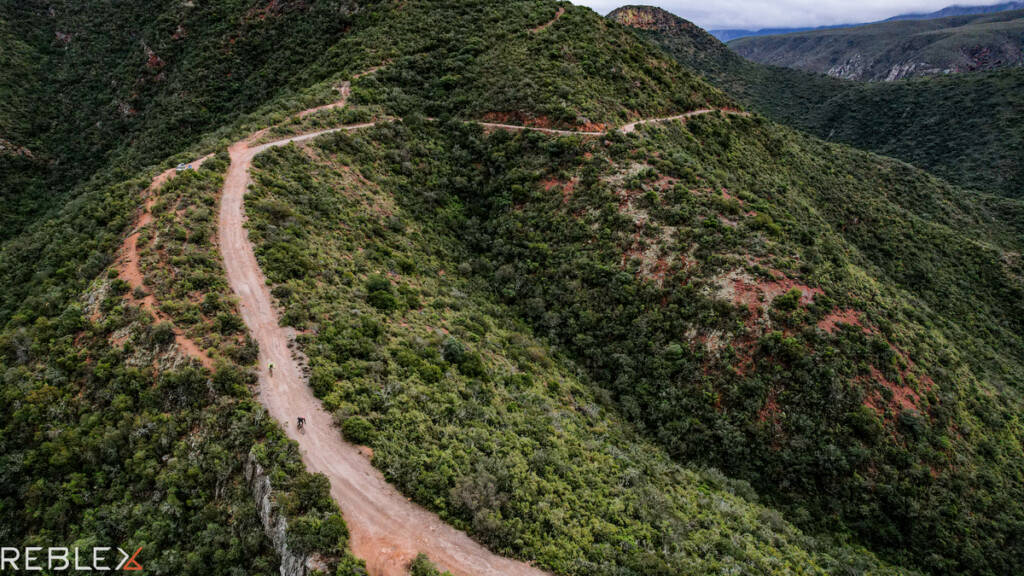 The cold and wet conditions made climbing preferable to descending for once at the Trans Baviaans. Photo by Llewellyn Lloyd / Reblex Photography.

De Villiers, struggled with mud in her eyes for much of the race was happy with her second place overall and another mixed category title. “It was so tough,” she exclaimed. “My hands were so cold for the first three hours I couldn’t get gels out of my top tube bag. Fortunately, Drikus [Coetzee] is a great partner and looked after me really well, especially when my inability to fuel earlier hit me on the climb up MAC.”

Isaacs and Oliver were equally satisfied with third, especially after pointing out how challenging the conditions were. “That was brutal,” was Isaacs’ succinct summary. That sentiment was shared by the women’s race winners too. 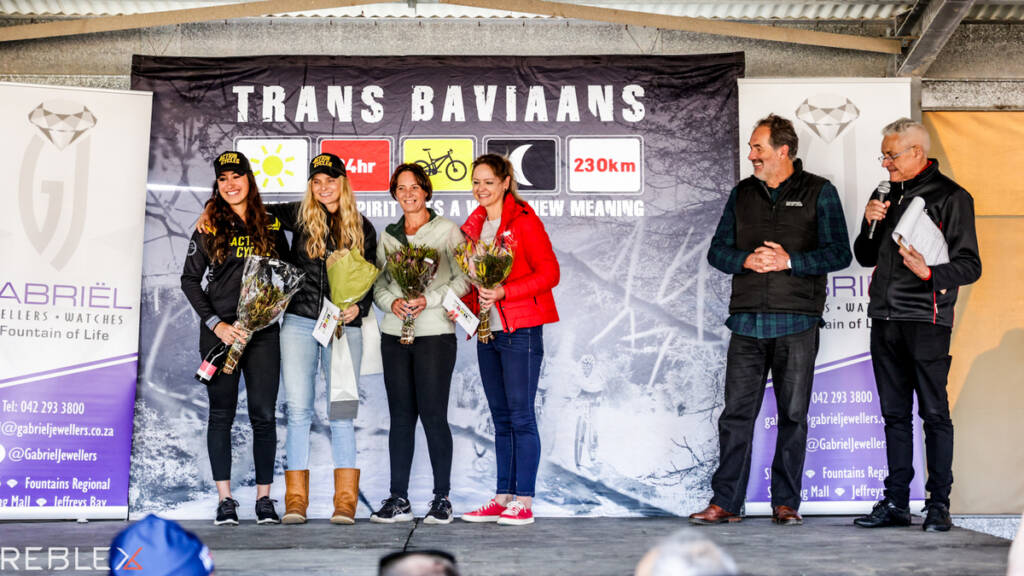 Nicola Freitas and Juanita Mackenzie inherited the lead in the competition nearly 80 kilometres into the 230 kilometre course. They had been trailing the pre-race favourites, Lucie Zelenkova and Elicia Venter, but when they withdrew the Action Cycles team continued to push on. “I’m so grateful to Juanita for helping me through the first part today, I just wasn’t feeling good,” Freitas confessed. “You were strong at the end though,” Mackenzie reassured Freitas. “Then I hitched onto the train home.” The strength of the Action Cycles team’s performance was illustrated by the fact that they finished seventh overall. Showcasing once more that conserving energy for the final 60 kilometres, pays off in the Trans Baviaans.

Following the wet and muddy Trans Baviaans Race the Repeat takes place on Saturday, the 20th of August. Riders will be taking on the same route, but will be hoping for much better weather. In the meantime though participants and fans alike can recap on the first edition, by liking the Trans Baviaans 24HR MTB Race Facebook page, following @transbaviaans on Instagram as well as @EcoBoundEvents on Twitter. 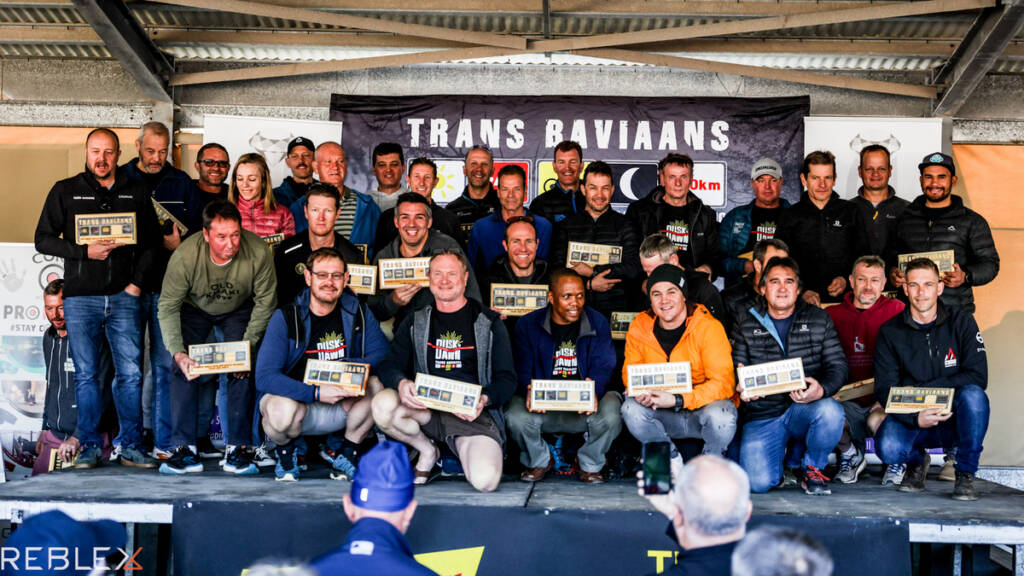 Nearly 40 riders were honoured, at the Fountains Mall on Sunday, with five-year plaques for completing their fifth Trans Baviaans events. Photo by Llewellyn Lloyd / Reblex Photography. 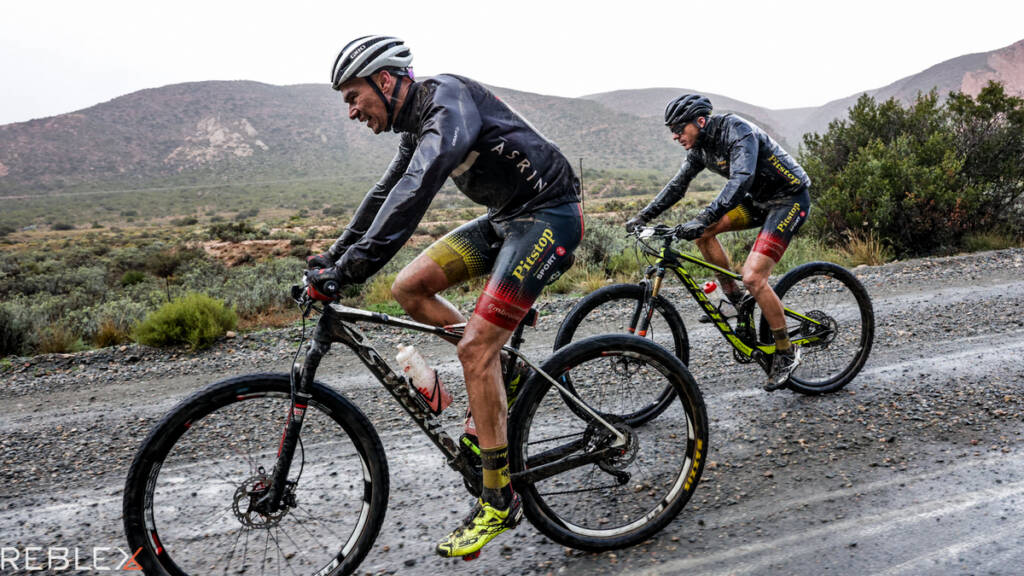 Malcolm Isaacs and Conway Oliver had a strong race through the Baviaanskloof and were in contention for victory until the slopes of the Mother of All Climbs, 135 kilometres into the course. Photo by Llewellyn Lloyd / Reblex Photography. 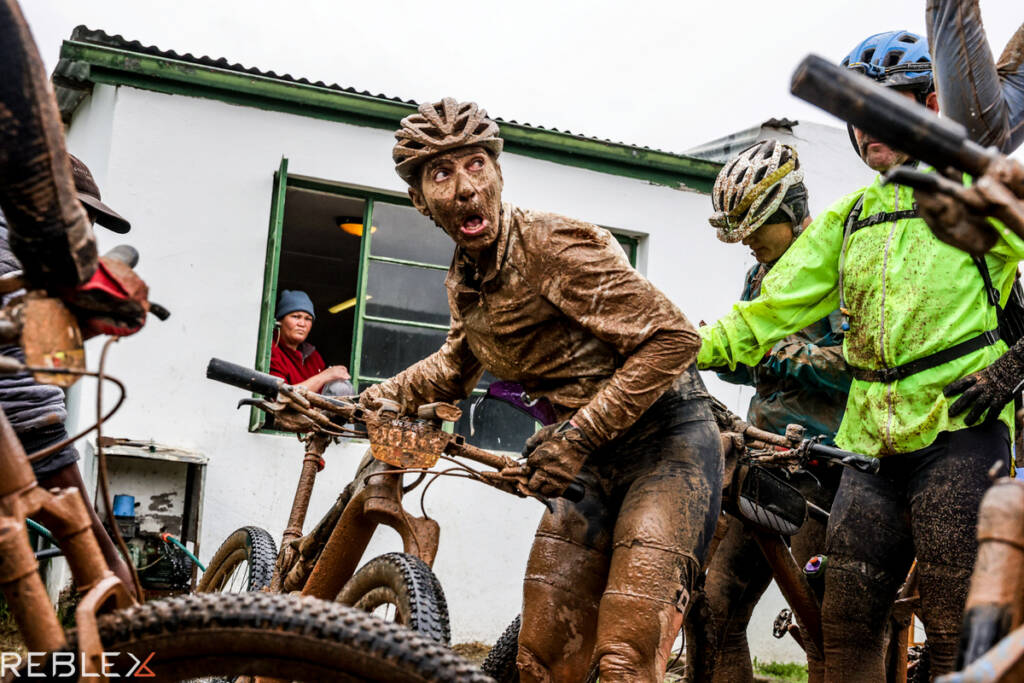