The tenth edition of the CCPP Group Dr Evil Classic concluded in spectacular fashion at Cairnbrogie Mountain Bike Trail Park, outside Plettenberg Bay, on Saturday, 24 September. After a day of scenic gravel grinding in the MTO Forestry plantations, around Wittedrift, and a day of persistent drizzle resulting in muddy trails, in the indigenous forest of SAN Park’s Harkerville reserve, the final stage was perfect. As was Damon Terblanche and Zeandro Jordaan’s race through the singletrack packed route.

The Knysna Sport School pair’s race was marred by two major mechanicals on Stages 1 and 2. This put them out of the running for a strong general classification result and motivated them to give the final stage everything they had. “I wanted to go from the gun, but Zeandro [Jordaan] told me to hold back,” Terblanche grinned. “Then after about 10 kilometre he sprinted off, away from Kevin [Evens] and Neill [Clark]. So, I followed him. We race a lot of cross-country so all the singletrack today really suited us. Once we were away, we could ride our own pace and win the stage.” 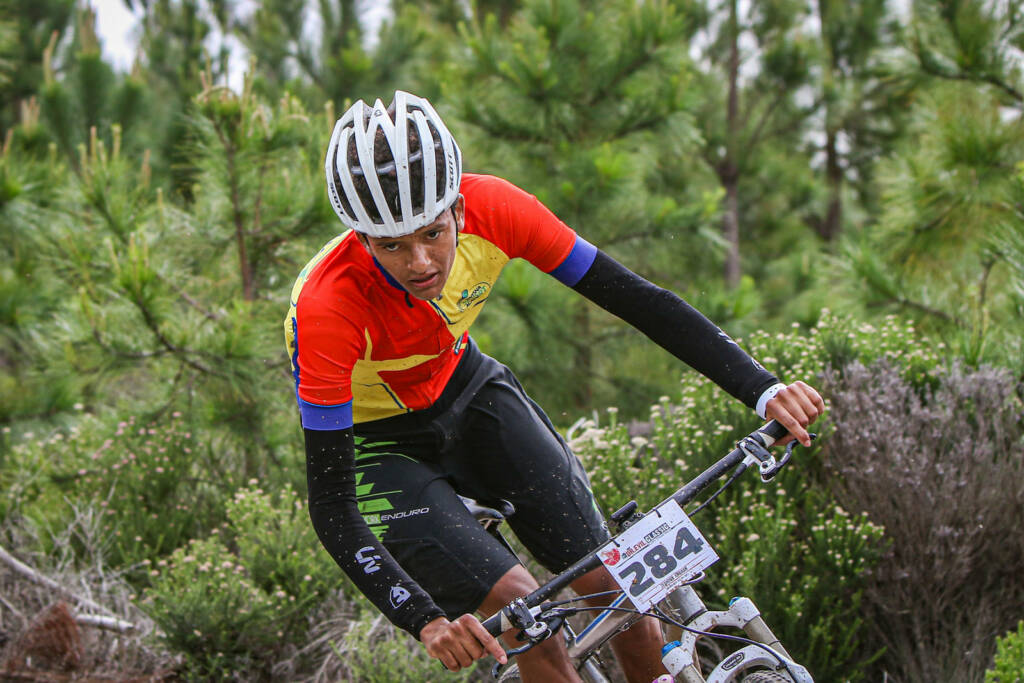 Evans and Clark wrapped up the general classification victory behind the youngsters from Knysna. They already had one eye on Sunday however. “I told Neill that we have a space in the car tomorrow,” Evans laughed. “He said he’s been making bad decisions, riding with me, all week this week. So, he’s doubling down and coming to the CCPP Group Lions Karoo to Coast tomorrow.”

The Bike Shop Plett pair are by no means the only riders taking on the 100 kilometre race from Uniondale to Knysna on Sunday, 25 September. It is the de facto fourth stage of the CCPP Group Dr Evil Classic. Though the mixed and women’s category winners will not be among the 4 500 riders taking on Prince Alfred Pass. 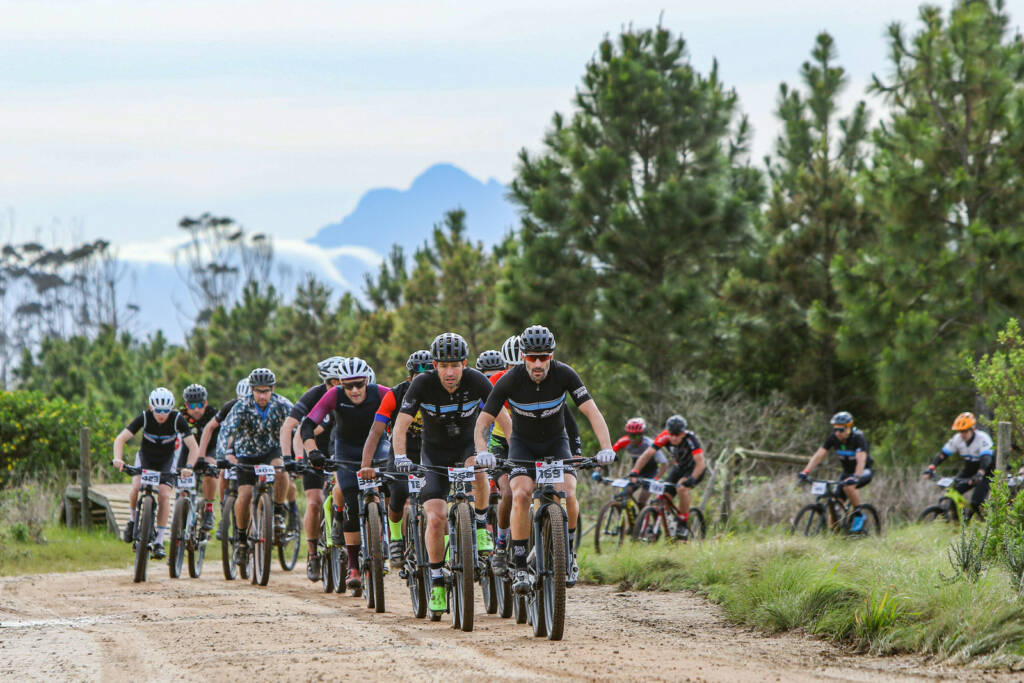 Kevin Evans (front) and Neill Clark were the worthy winners of the men’s race, claiming two stages and the overall title by more than 16 minutes. Photo by Oakpics.com.

Clinton Mackintosh and Brigitte Joubert were in a class of their own in the mixed category. The First Ascent Cyanosis combination won all three stages and were highly impressed by the riding in Plettenberg Bay. “That singletrack was probably some of the best I’ve ridden in South Africa,” Mackintosh praised. “The trail builders have done an amazing job.”

The sentiment was echoed by the women’s winners, though they had to fight their way through the groups on the final stage. “We started right at the back, after watching the closing kilometres of the Women’s World Championships Road Race,” Cherise Willeit smiled. “Ashleigh [Moolman-Pasio]’s break and then Annemiek [van Vleuten’s] surge to victory had our adrenaline going and our heart rates sky high. It was amazing watching women race!” The late start and distraction did not prevent the Honey Custom Apparel women from securing the title ahead of the Invicta Ladies. 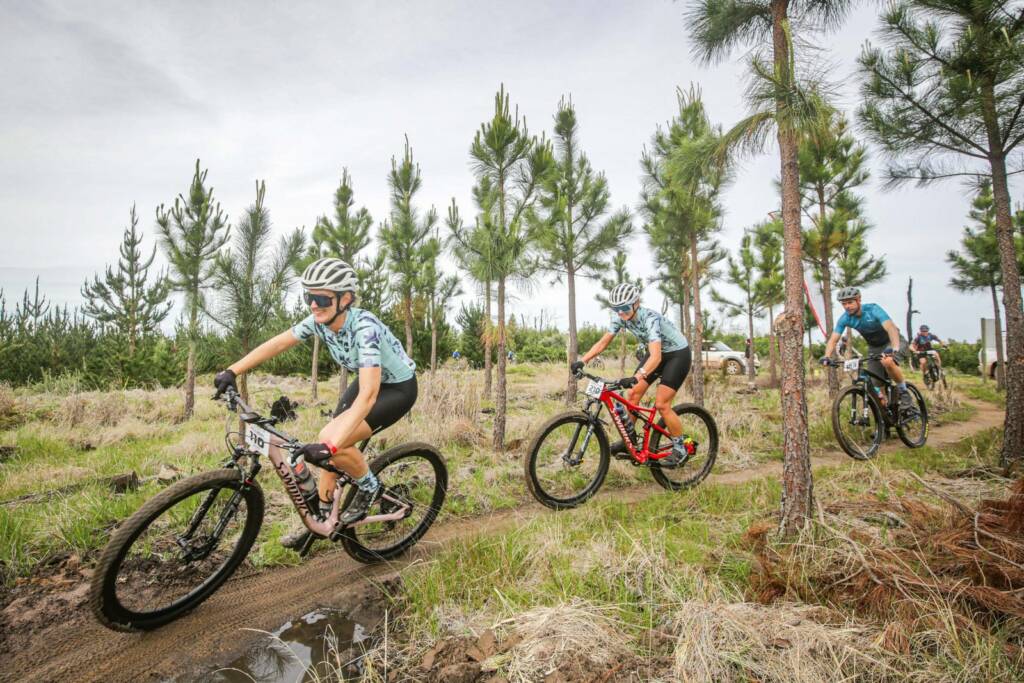 Despite starting late, after watching the conclusion of the Women’s World Championships Road Race, Nicky Giliomee (front) and Cherise Willeit wrapped up the women’s title at the 2022 CCPP Group Dr Evil Classic. Photo by Oakpics.com.

Plettenberg Bay’s growing reputation as a mountain bike destination was undoubtedly enhanced by the 2022 event. “The singletracks here at Cainbrogie and in the MTO plantations are incredible,” one finisher was overheard enthusing. “I’m from Stellenbosch so I’m blessed with great riding. This comes really close…”

Mountain bikers who loved the 2022 race and those who watched on with envy can secure their spot in the 2023 race on Sunday, 25 September when the entries open. Next year’s CCPP Group Dr Evil Classic will take place from the 21st to the 23rd of September. To enter online or for more information visit www.drevilclassic.com. 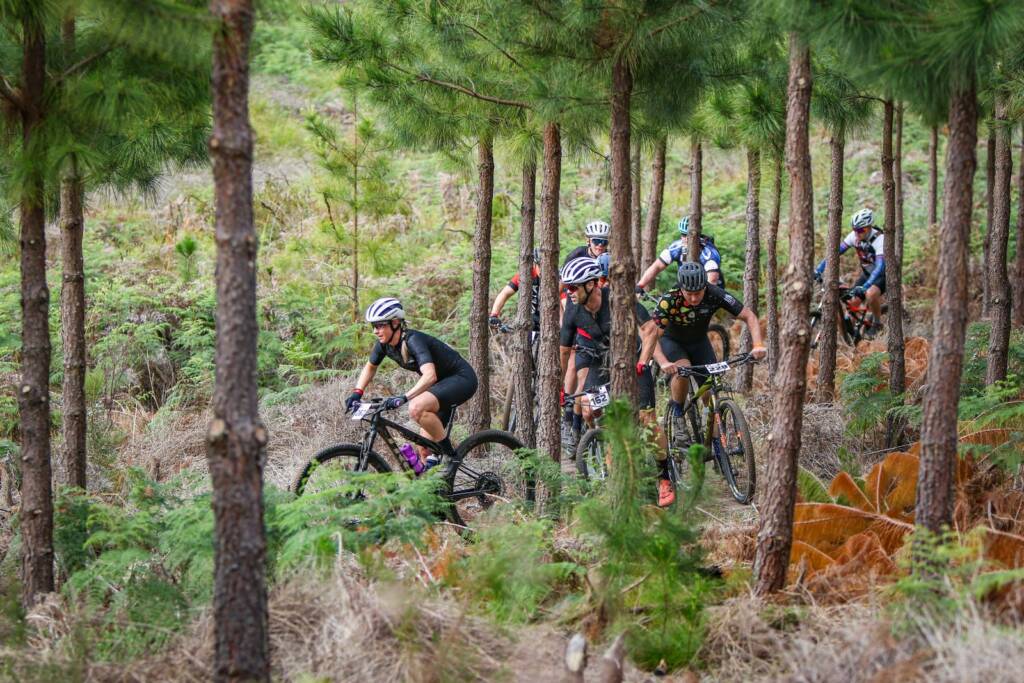 Adventure racers, Brigitte Joubert (leading) and Clinton Mackintosh made a clean sweep of the stages in the mixed category. Photo by Oakpics.com. 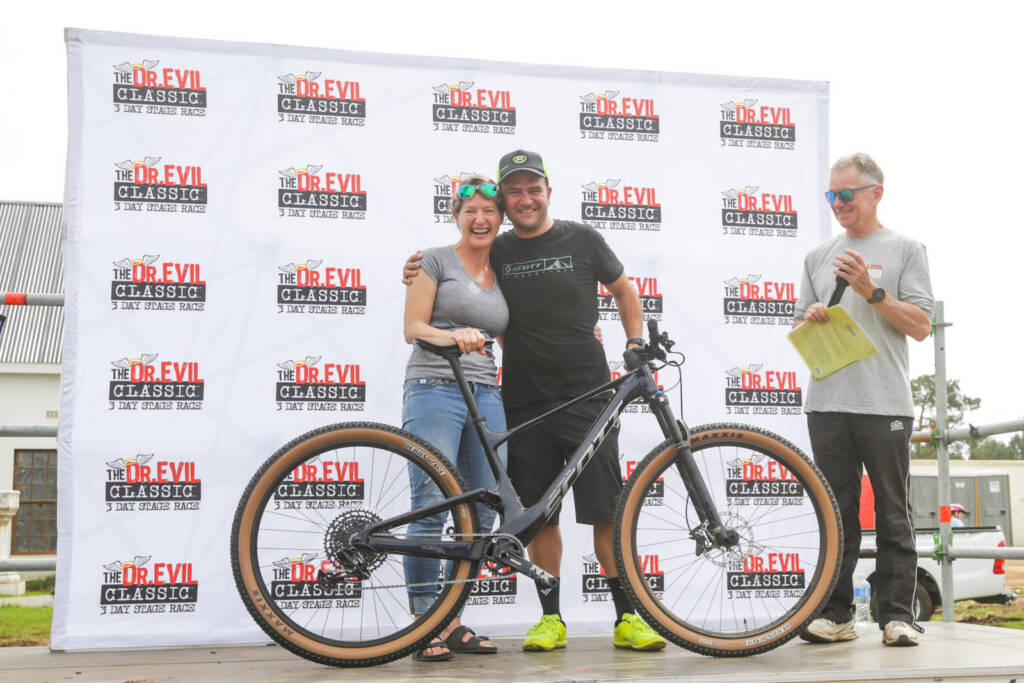 Nicky Greek (left) was the winner of a 2023 SCOTT Spark RC 900 in the SCOTT Sports Africa social media competition. A second Spark RC 900 will be given away at the prize giving of the 2022 CCPP Group Lions Karoo to Coast on Sunday. Photo by Oakpics.com. 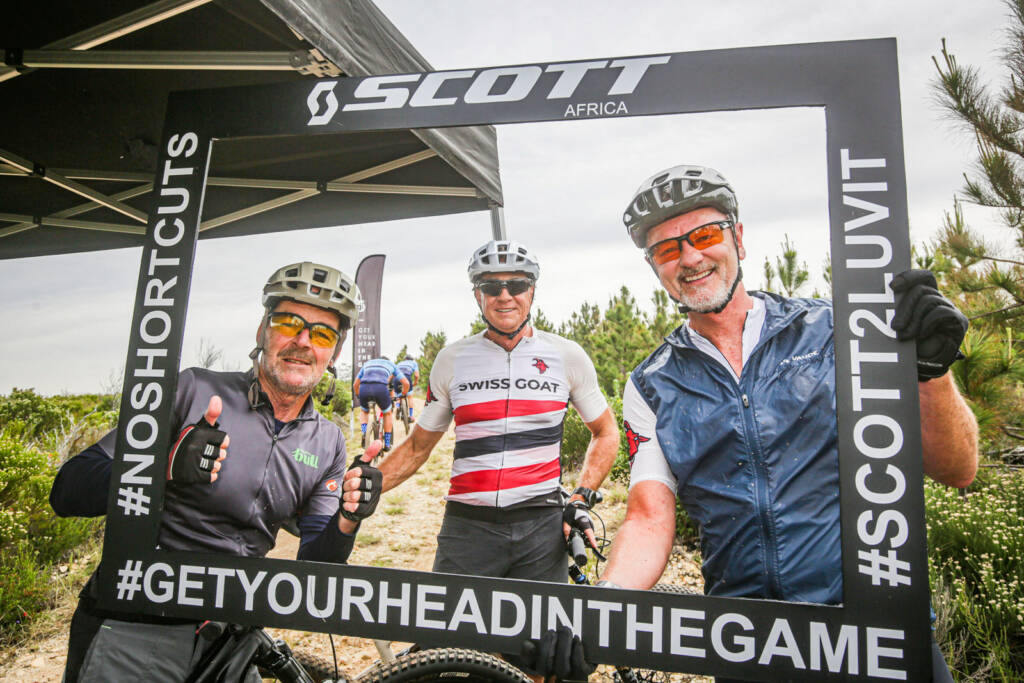 SCOTT Sports Africa gave 68 CCPP Group Dr Evil Classic riders new SCOTT helmets during Stage 3 of the race. The helmets they replaced will now be donated to one of the event’s beneficiaries, Kwano Cycling Academy. Photo by Oakpics.com. 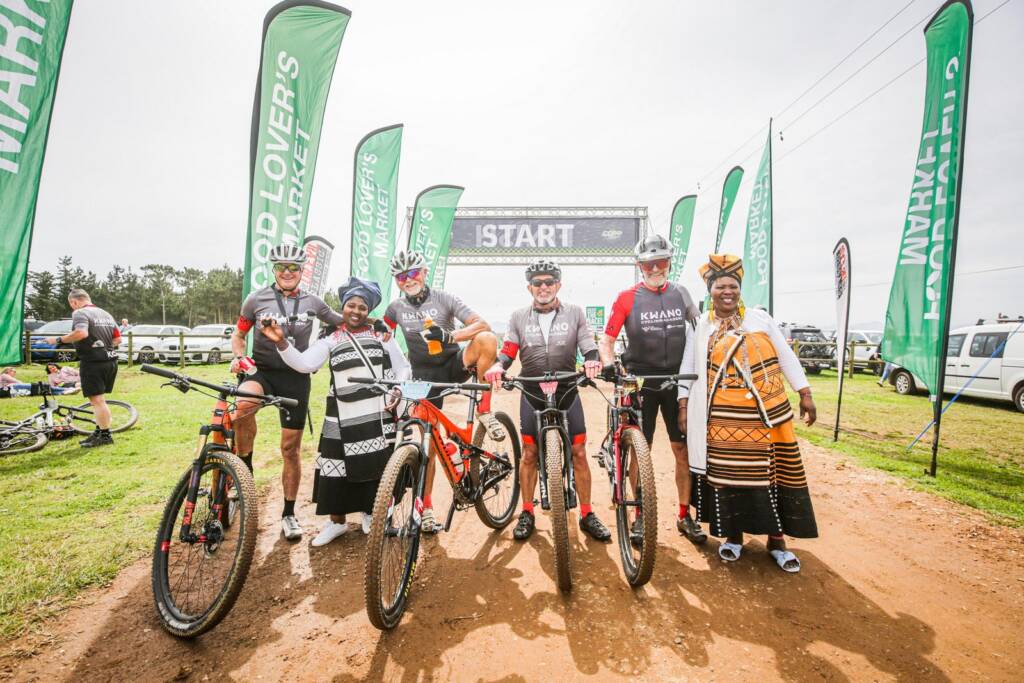 Heritage Day was celebrated in fine style at Cairnbrogie on Stage 3. Photo by Oakpics.com.