The South African mountain biking development academy team, BMT Fairtree, made their first international trip to take part in the 2019 Swiss Epic. Just getting to Davos was half the battle for Luyanda Thobigunya and Zola Ngxakeni.

In a field filled with mountain bikers accustomed to traveling to races Luyanda Thobigunya and Zola Ngxakeni were outsiders. Not only had the BMT Fairtree riders never flown before their trip to the 2019 Swiss Epic, but they had never left South Africa either. The logistics of international travel; clearing customs, foreign airports and train changes were all very new and overwhelming… 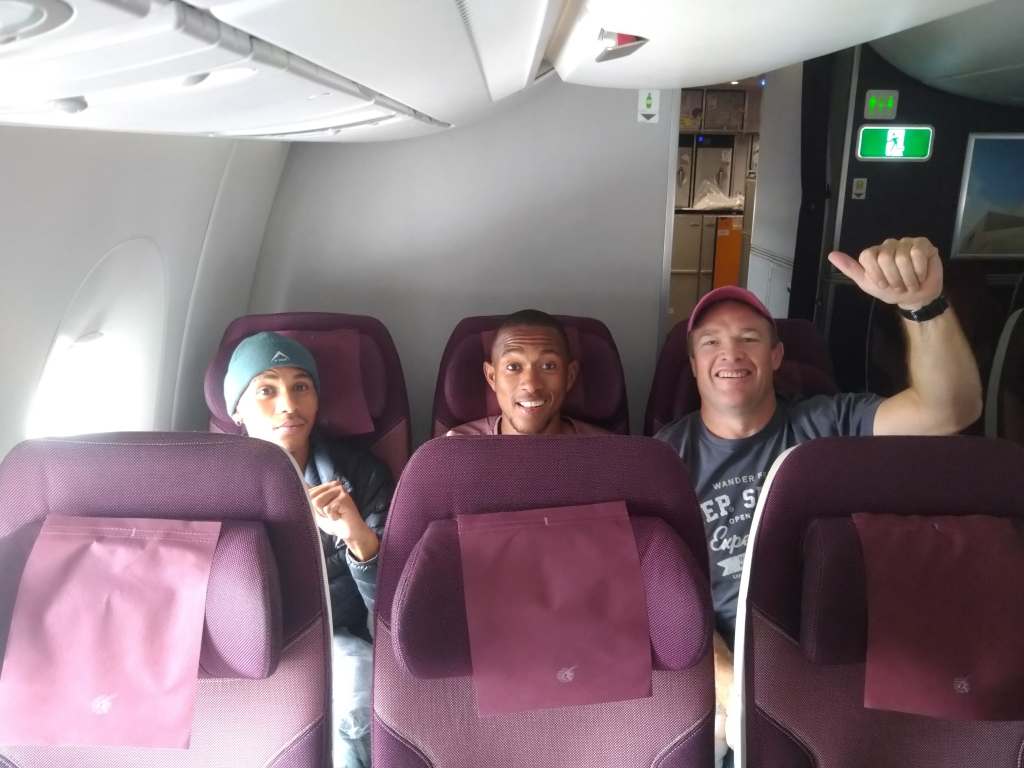 From left to right: Luyanda, Zola and Chris.

“Is this for real?” asked Zola, as he gazed in wonder around Doha airport’s duty-free stores. “It is the first time I’ve been on an aeroplane and the flight was so long” he said, after just a few hours restless sleep on the plane. His and Luyanda’s journey had started 24 hours earlier in Kayamandi; outside South Africa’s mountain biking mecca, Stellenbosch.

They travelled to Switzerland’s Graubünden canton with BMT Mountain Bike Academy founder Chris Norton. Norton founded the academy from his Stellenbosch bicycle shop. The pair and their fellow academy riders are supported by Fairtree Capital, whose Fund Manager, Stephen Brown, partnered Norton in the Swiss Epic. Brown, though had travelled to Davos a few days before so Chris, Luyanda and Zola made the journey together. 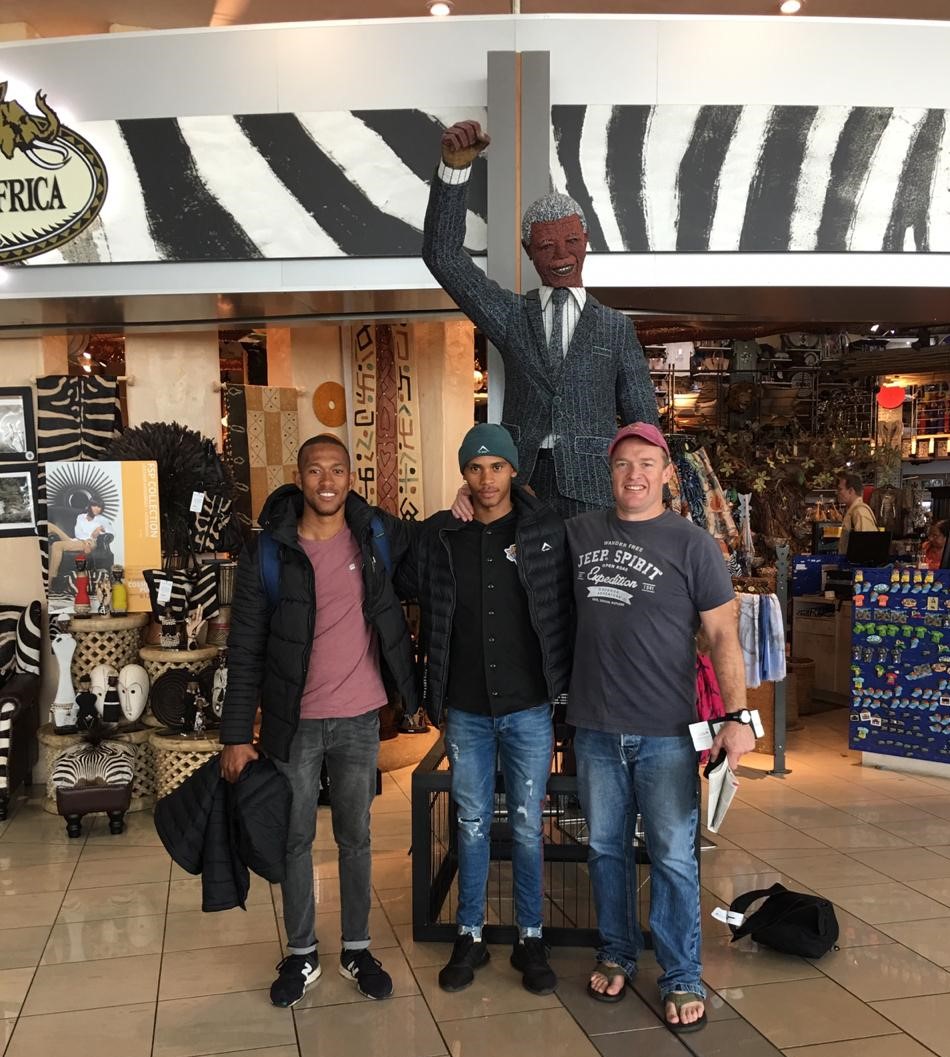 Leaving South Africa was the easy part. They departed from Kayamandi at 8am, got to the airport by 9, checked in and dropped off their bike boxes at the oversized luggage counter. Boarding their flight for Zurich, via Doha, in Cape Town, at mid-day, was simple too. The next 12 hours were spent immersed in the in-flight entertainment options. Sleep would have to wait for the next leg of the journey, Luyanda and Zola’s excitement levels were too high. Chris, in the aisle seat had no such issues. He was passed out within minutes of supper being served.

Arriving in Doha was culture shock number one. Seated right at the back of the plane Luyanda and Zola were the last to disembark. Stepping out of the airconditioned plane into the 34-degree heat and 100% humidity, at 11pm, of the Qatar night caused them to recoil. “Can you imagine riding a bike in this?” Chris asked. “Luyanda, there would be nothing left of you after a day of this heat. You’d sweat away to nothing, you’re already so skinny” he joked. 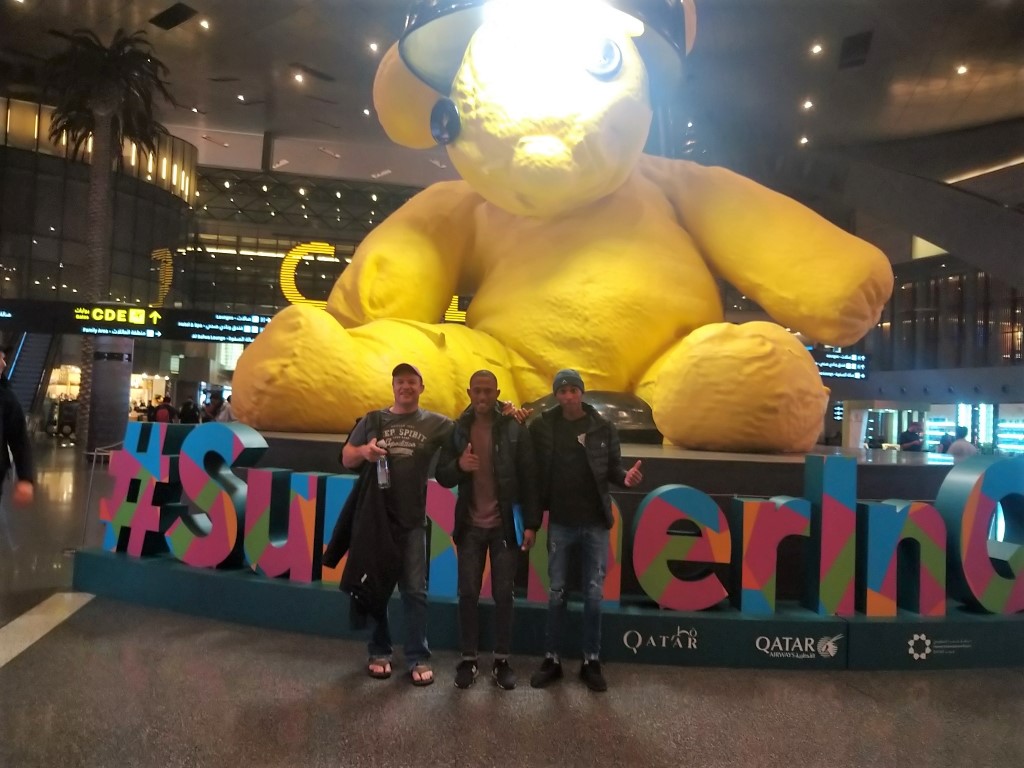 Doha airport is a strange place…

Dohar airport, once they got inside, was as much of a shock as the heat. Both Luyanda and Zola could hardly keep their eyes on where they were going such was the eagerness with which they absorbed their new surroundings. A $6 coffee each later, which translates to a bold R92, they checked in for the second half of the journey to Switzerland.

This time they managed to get a few hours of sleep. Which was essential as the next leg of the journey, from Zurich to Davos, would be filled with mad sprints around train stations with bike boxes, 30kg bags and only a vague idea of where they were going. 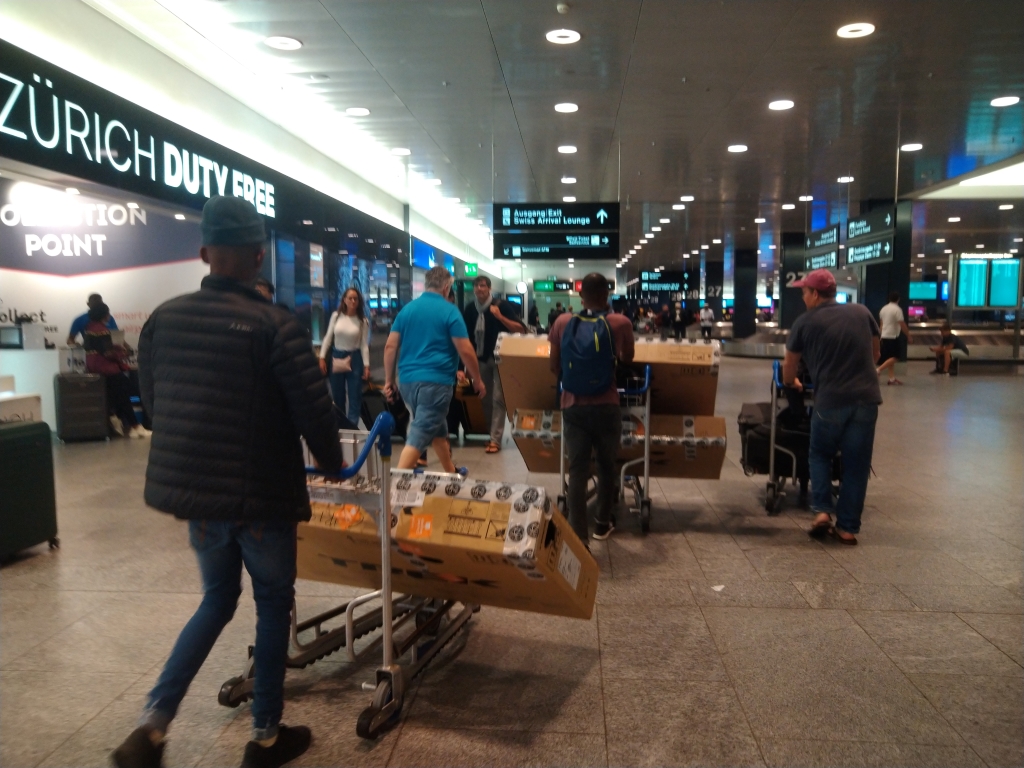 Clearing customs in Zurich was surprisingly fast. A change of queue, from a particularly difficult sounding official’s to one manned by the most relaxed man in the country made, things a lot easier. From there it was organised chaos, helped along by friendly Swiss railway staff. Step one was getting three bike boxes down a narrow escalator in 8am pedestrian traffic. The polite South Africans just could not get a foot into the rush of people charging for the escalator. Eventually they forced their way in and got down to the platform to await the train from the airport to Zurich central station. 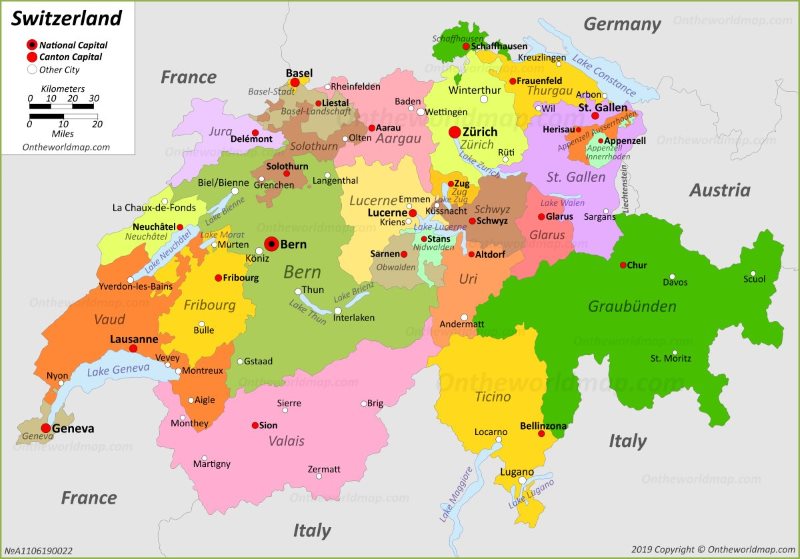 The guys needed to catch a train to Graubunden in the south eastern corner of Switzerland.

The Swiss Epic started in Davos, before visiting St. Moritz and Lenzerheide.

Here their fourth companion, Seamus Allardice, slowed the process down. He had pre-booked his train journey but the times on his tickets were strictly stipulated. Having asked a conductor if they would be able to take the 08:40 train rather than wait until 09:01 he was told: “impossible”. So, they had to wait.

Waiting at the airport train station meant that they were pressed for time in Zurich central. There the first of their long transfers between trains had them running 100 meters between platforms 1 and 13. Seamus and Luyanda carrying two boxes between them, while Zola lugged a box on his own and Chris dragged three wheelie bags. 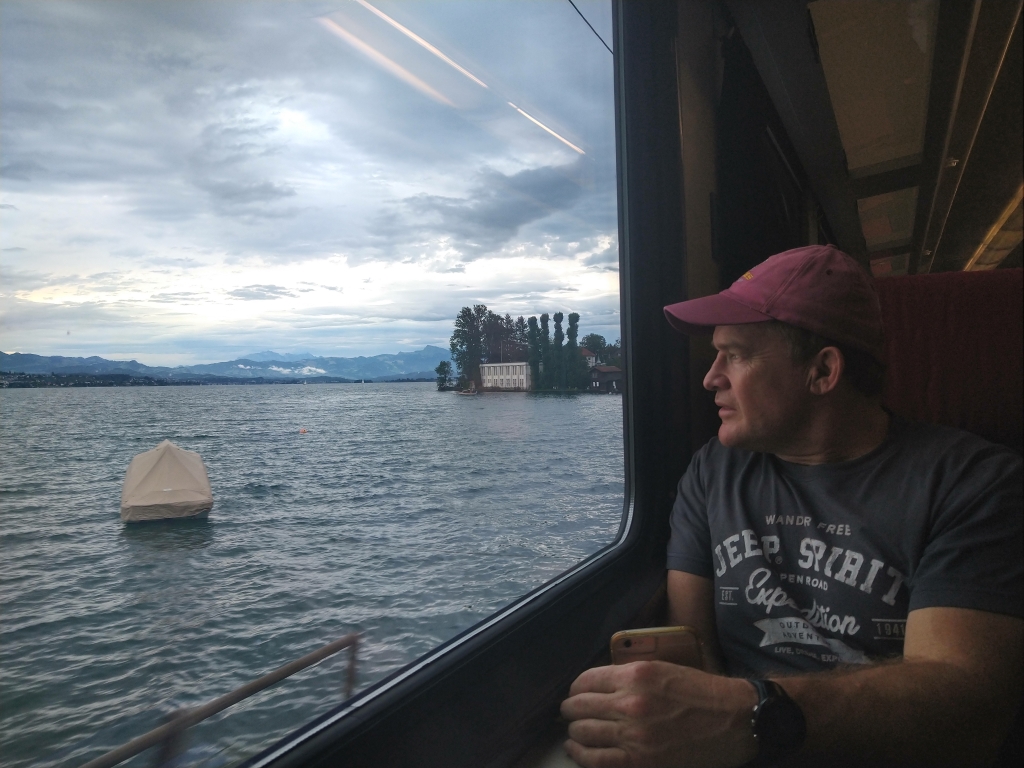 After checking with a conductor and a fellow traveller they felt reasonably confident that they were on the right train, which would take them south towards Graubünden. The next hour, on the train, was spent marvelling at the size of the mountains and the clarity of the water in the Swiss lakes. Then it was time to change again. This time they had only 6 minutes to find the right platform, to hustle their way through the underpass below the tracks and get all their luggage into the final train to Davos. 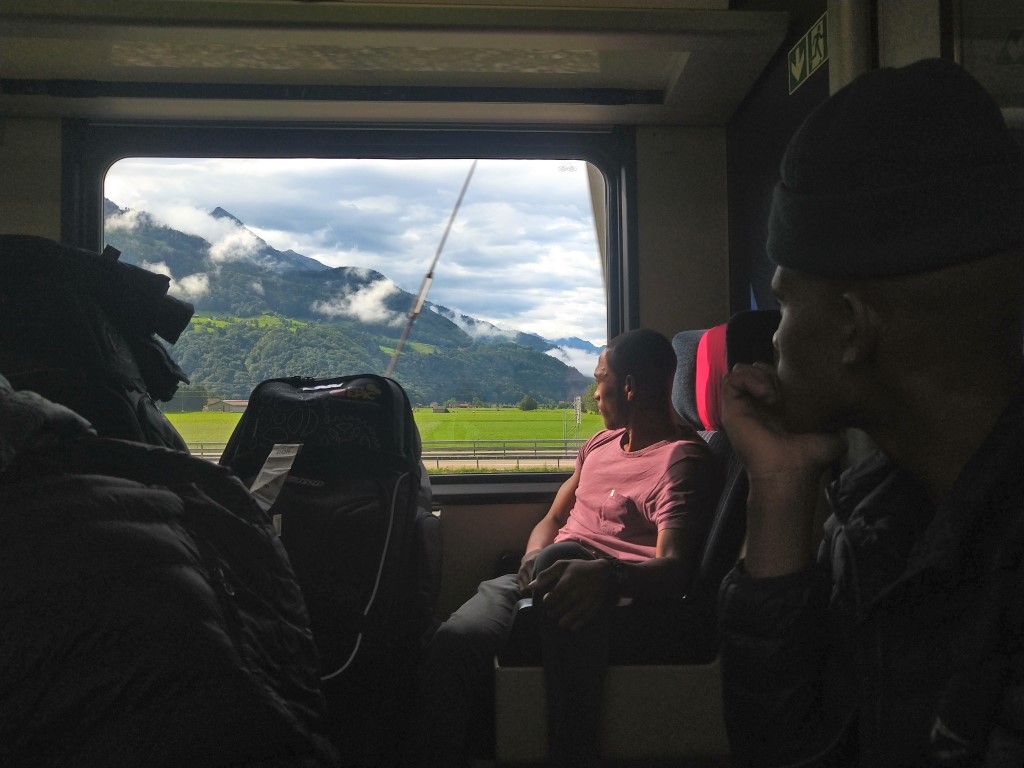 Zola and Luyanda wide eyed at the size of the mountains which awaited them.

As they settled into the first carriage they could finally relax. The last hurdle of the journey was nearly over. The final stop would deposit them 600 metres from the race village, at Davos Klosters. 15 minutes of feeling smug was all they were afforded by a ticket officer. Taking one look at Chris’s ticket she proclaimed: “Sir, this is an economy class ticket.” The group looked around. It was the four of them, a young mother and her two small children on the train. The rest of the carriage was empty. There were two stops on the route to Davos. “Can we stay here” Chris enquired. “Yes, if you pay the extra” was the curt response.

“How much is the extra” Chris inquired.

“40 Swiss Francs” the officer fired back.

So, they up and moved. Dragging boxes and bags with them across the rickety joint between the carriages. The ticket officer carefully watching on, ensuring her instructions were followed. 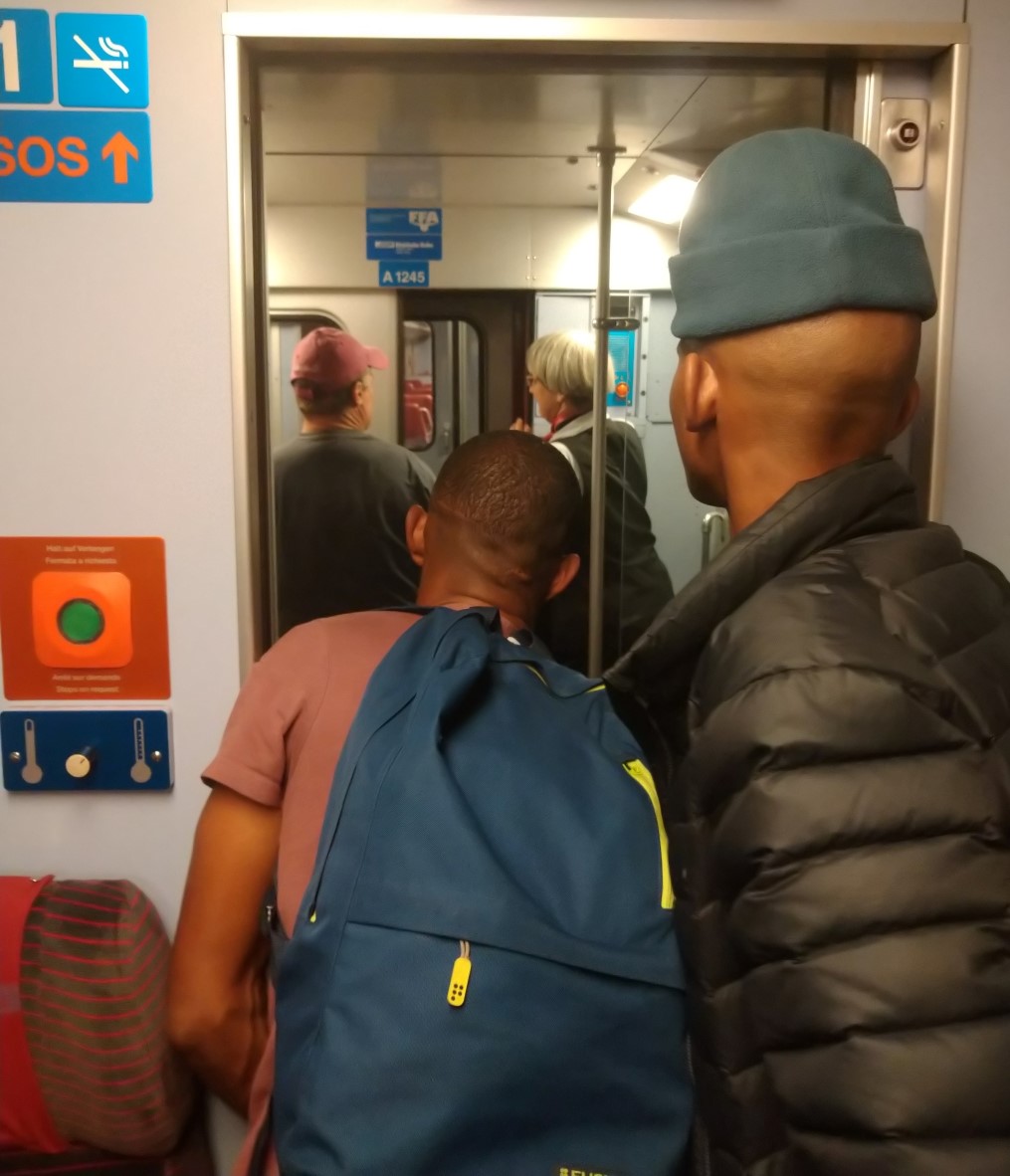 Move or pay 40 Swiss Francs each…

Economy class on the little train between Landquart and Dovos made the South Africans feel right at home. The faded upholstery and scuffed flooring were straight out of a SANRail train. The big difference of course was that the Swiss train was running metronomically on time.

Arriving in Davos the first task was to log-in to WiFi. With none of the group feeling flush enough to risk the data roaming fees they were all relying on the Swiss railway’s free WiFi. The only issue was that each station had its own system and thus required a new log-in. Between Zurich and Davos this was a minor inconvenience, the inability to send loved-ones WhatsApp messages while in transit was not such a big deal. But not being able to access Google Maps to navigate to the Race Village was a bigger concern. 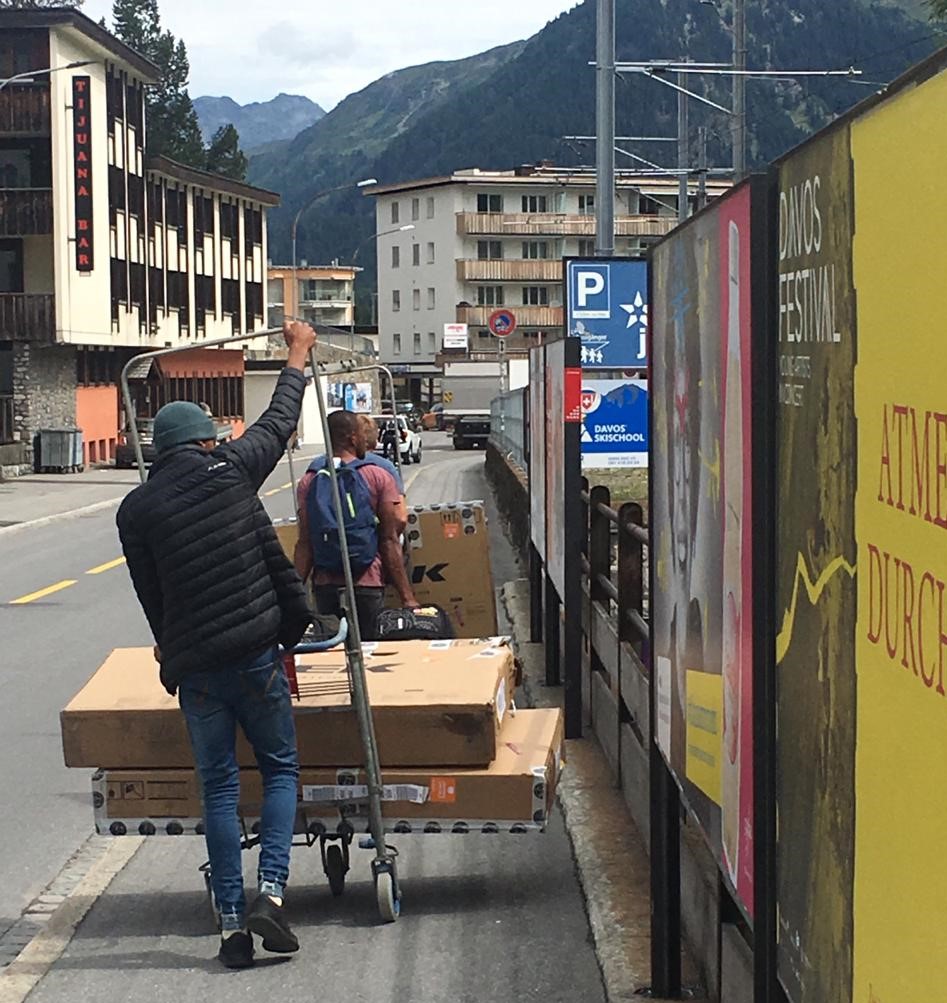 There was no way they were going to carry those boxes again.

Once online they discovered which direction they had to walk in and confirmed that they had a 600 metre walk ahead of them. Which had not seemed so bad from Zurich, but 4 hours later in Davos it was definitely 599 meters too far. Somehow the bike boxes were getting heavier and more cumbersome at every stop. There was nothing to do but resort to some good, old fashioned, South African ingenuity. Spotting a couple of Davos Central Station trollies, with signs clearly specifying that they were not to leave the station premises on them, the guys loaded up the bike boxes and bags.

If carrying boxes was the alternative, theft of Swiss state property would have to do. They then doubled up on the misdemeanours by repeatedly jay-walking, a serious social crime by the looks of things in law abiding Switzerland. Somehow though, they made it to registration without being stopped by anyone. Apparently, the country’s most efficient law enforcement officer was on the train back to Landquart already. Fortunately! 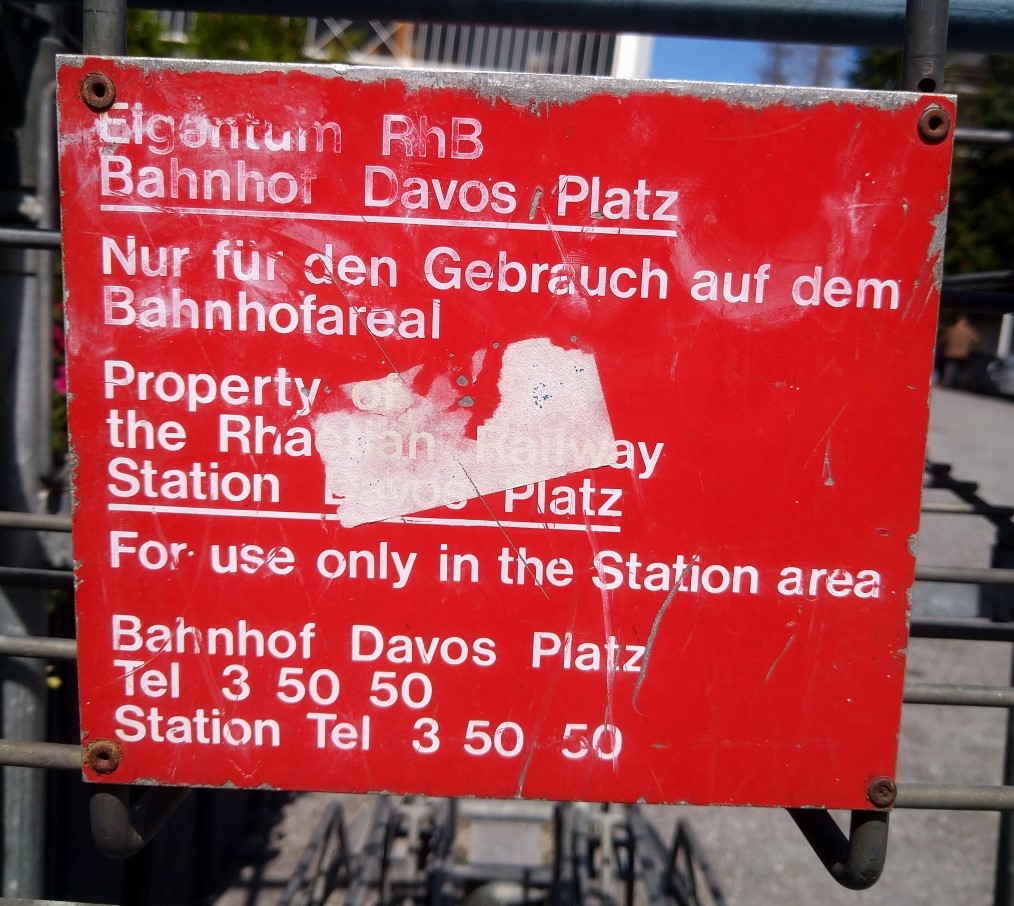 As for the trollies. They were never returned. But they were at least not dumped in a river. As would be the traditional South African means of disposal for a stolen trolley… 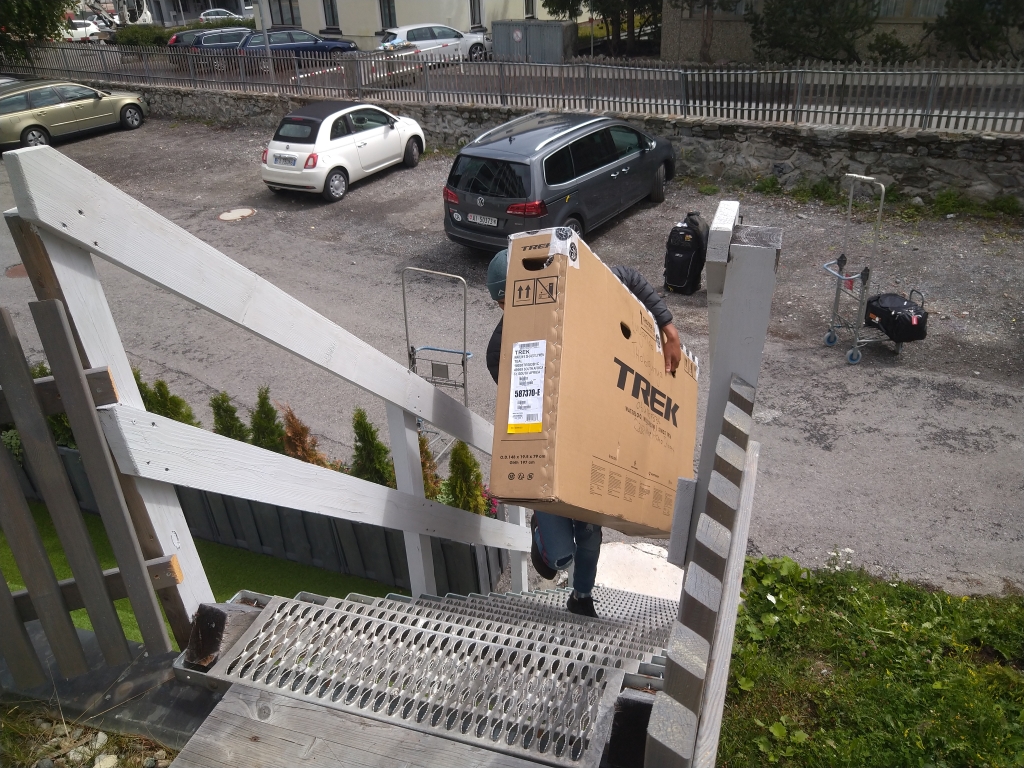 Luyanda lugging a bike box up the hotel stairs.

Listen to the Post-Swiss Epic Podcast

Tune in as Zola and Luyanda discuss their Swiss Epic experiences in this episode of the Diverge Podcast. BMT Fairtree at the Swiss Epic
An episode by Diverge Podcast 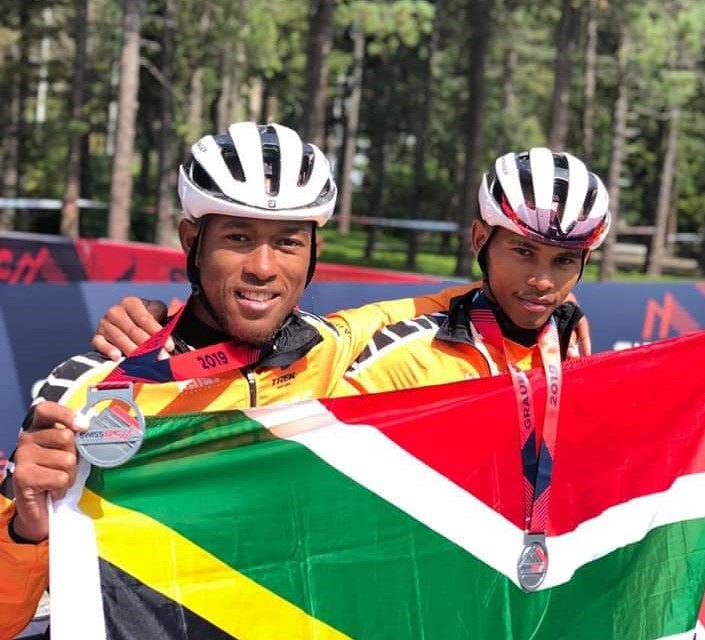 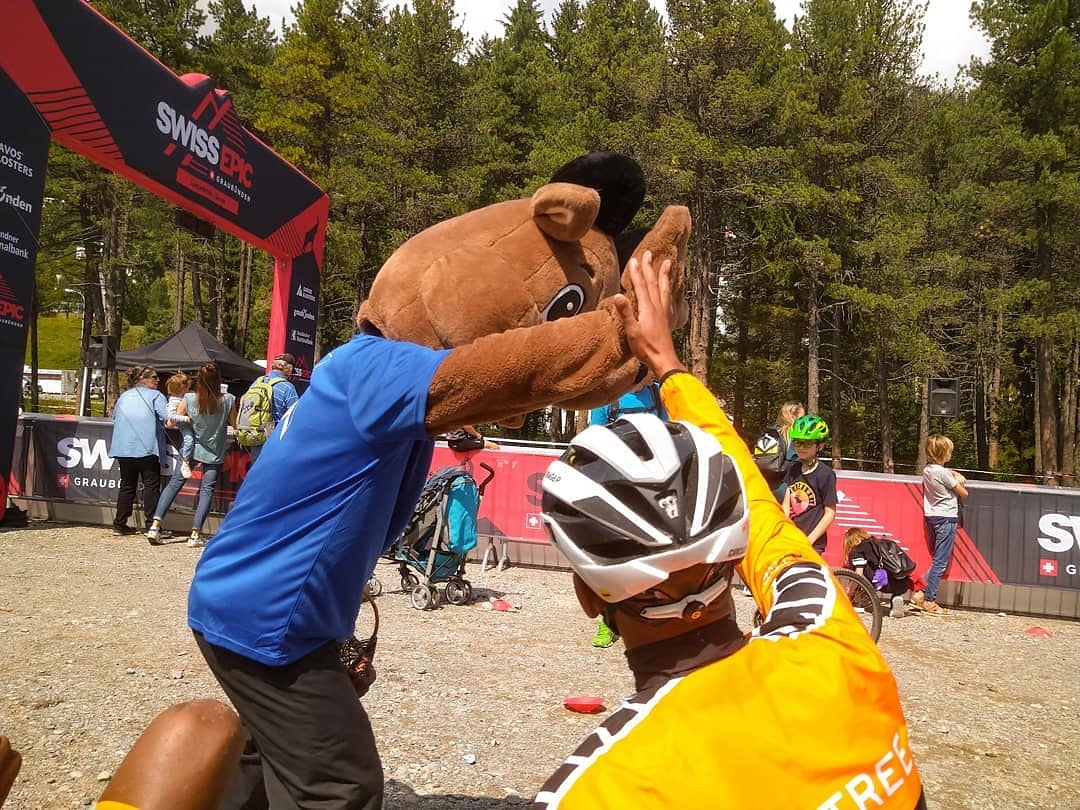 High fives from the Graubunden Ibex mascot on a job well done.