I hardly ever get the chance to actually ride stage races. The last time I did a multi-day event myself was when I rode Trek2Teebus in April 2021. Usually, I work at events. That’s why, when Luke Lockhart-Ross offered me an entry to the mid-week Pinotage race at the 2022 FNB Wines2Whales I jumped at the chance. Then I realised I needed to find a partner who could take off from Monday to Wednesday.

Initially I roped in Dirk du Toit, of Balance Coffee. But Dirk got over-excited and broke his pinkie a week before the race. So, I called in a last-minute hail-Mary to David Sullivan. Dave is a triathlon coach and photographer, who appears to do less real work than I do. It’s a carefully cultivated image which he was eager to maintain by dropping everything at short notice to ride W2W. If only because it didn’t clash with any golf commitments… 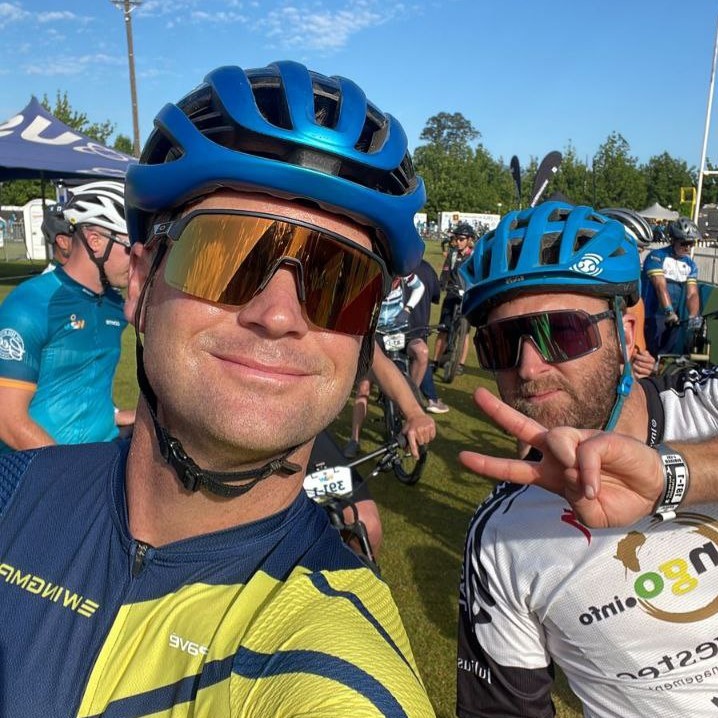 David Sullivan and Seamus Allardice (right) had never ridden together before the 2022 Wines2Whales Pinotage event.

Now, Dave and I had never ridden together. In fact, I’d only met him the month before working on the Otter Trail Run. Where we went for one 5 kilometre run together. What could go wrong on-the-bike? Well, a lot. But that didn’t matter because he’s hilariously funny and knows thousands of people. This is far more important at a stage race than on-the-bike compatibility! Trust me.

The big mistake normal people make is getting sucked into the belief that a multi-day event is a race for them too. It is. But it isn’t. It’s great to test yourself and ride as hard as you can, sure. But it’s also important to have a good time. And W2W is all about the good time. To do so I had a simple strategy. 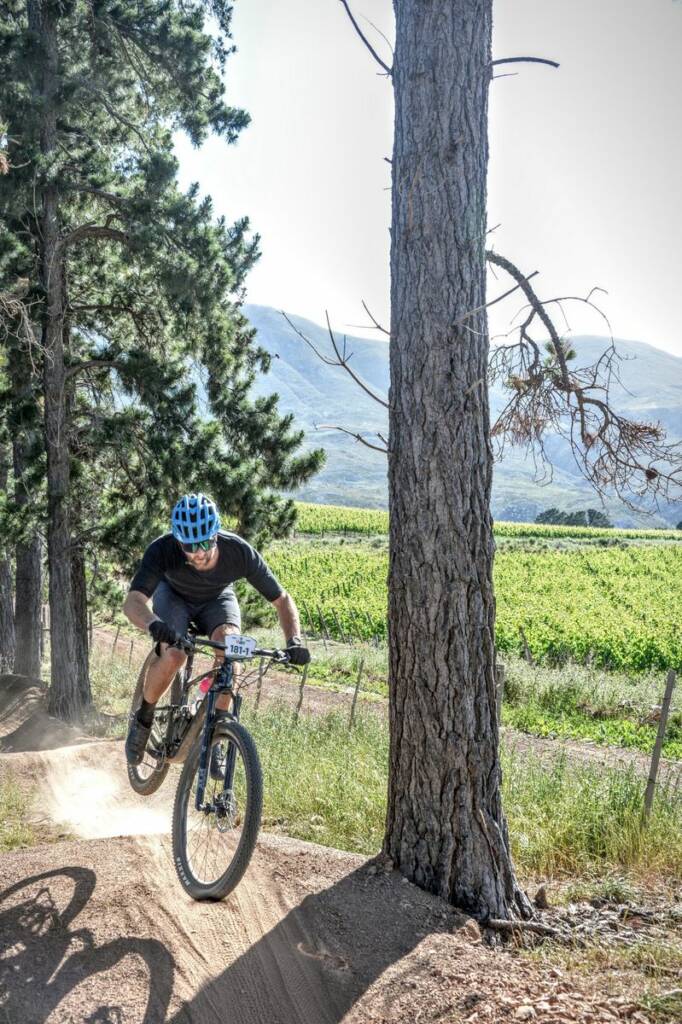 A good trail strategy allows for more of this.

We started in C batch and with a 10 minute gap to the start group in front there were always going to be times, especially in the first half of the stage, when there was clear trail at the front of the group. Rather than start fast and race to the first singletrack, Dave and I started steadily every day and then surged forward around the 10 kilometre mark in order to secure a clear run at the singletracks, which started around 13-14 kilometres into each route. I neglected to explain this effectively to Dave on Stage 1 though, and then on Stage 2 he didn’t quite get the memo either. Which meant that both times he was stranded in a group I’d just leapfrogged and followed a train down the Toyota Cruise sections while I managed to race ahead enjoying a clear run through the trails. On Stage 3 he caught on and actually led me into the trails at the bottom of Katpas.

The strategy of selective accelerations basically meant that in exchange for 10-15 minutes of relatively fast paced riding I got to ride some of the country’s best singletracks effectively on my own. In a stage race. With 600 or so other riders in close proximity. It was glorious.

I nearly felt sorry for Dave, seeing him riding his brakes behind 15 riders, with 10 more following him, at the bottom of the Toyota Cruise segments. Nearly. But not bad enough to amend my ways and ride as a team. I was there to have fun after all and the best way to do that is to get to ride the trails at your own pace, not the speed determined by the slowest rider ahead. 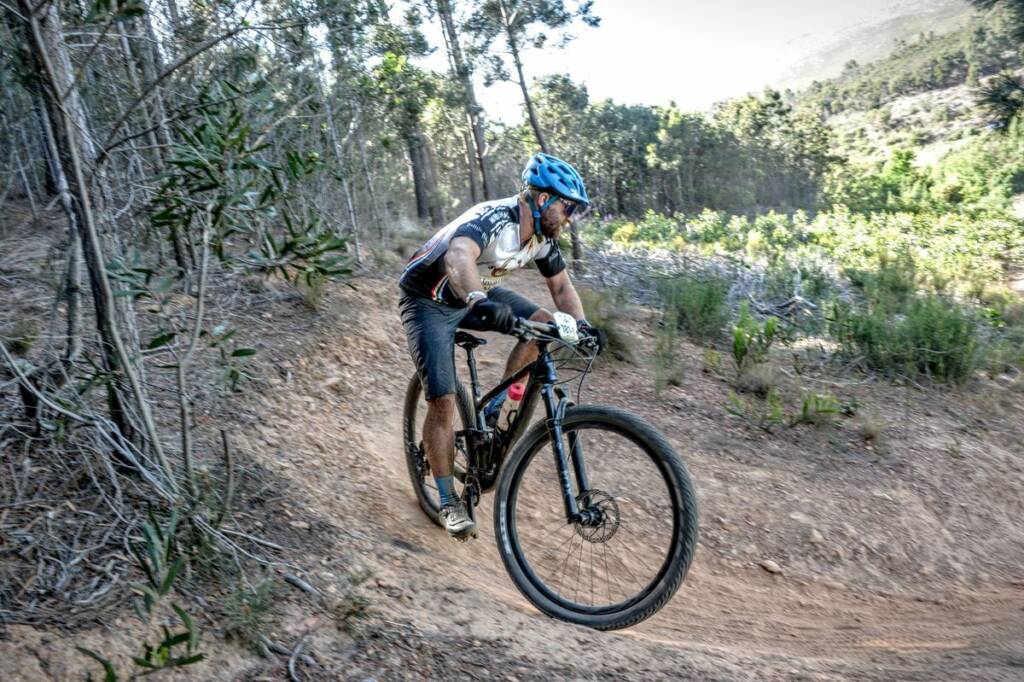 The times when I was caught in a group or caught up to a group on the trails highlighted to me once more the need for skills coaching in South African mountain biking. Too many riders have dropper seatposts but don’t use them. They ride relatively technical trails with their saddles up high, forcing them to hover awkwardly rather than dropping their centre of gravity for a more effective ride. Dropper seatposts aren’t exactly essential to stage racing, but they do make you life easier. Without a dropper post you need to get behind your saddle to get low enough to tackle technical descents quickly and safely, which can be awkward.

The solution to improving your skills and having more fun on the trails is simple: 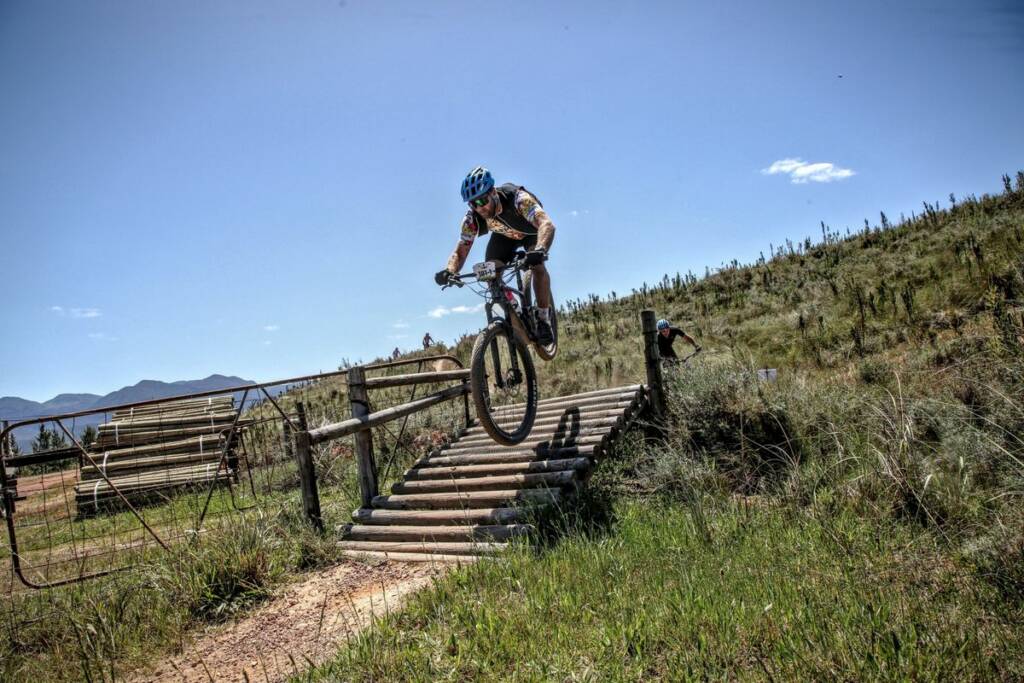 Back to the Story…

Having fun on the trails is just a small part of the Wines2Whales experience. The event advertises itself as the Race with Gees. Now, I must say I hate the word gees. It’s up there with awe (as in awe bra!) and lol in my book of nauseating terms. Maybe it’s because I’m personally terrible at writing tag lines, but that one in particular grates my gears. I’ve had to write it too many times in stories for W2W and every time I do a part of me dies.

I don’t disagree with the sentiment the word is trying to capture though. W2W has created an incredible atmosphere around the event. The race’s slot in the calendar is a big contributor to this, late in the year it serves as the final serious event of the season for many an avid racer. Its manageable distances also adds to this, because even novice stage racers aren’t too intimidated, so everyone is pretty relaxed in the race village. At the Cape Epic, or even the Tankwa Trek, riders are nervous about the day to come; not many indulge in a second beer if they even have one. At Wines2Whales most people have a drink more than they usually would at a bike race. 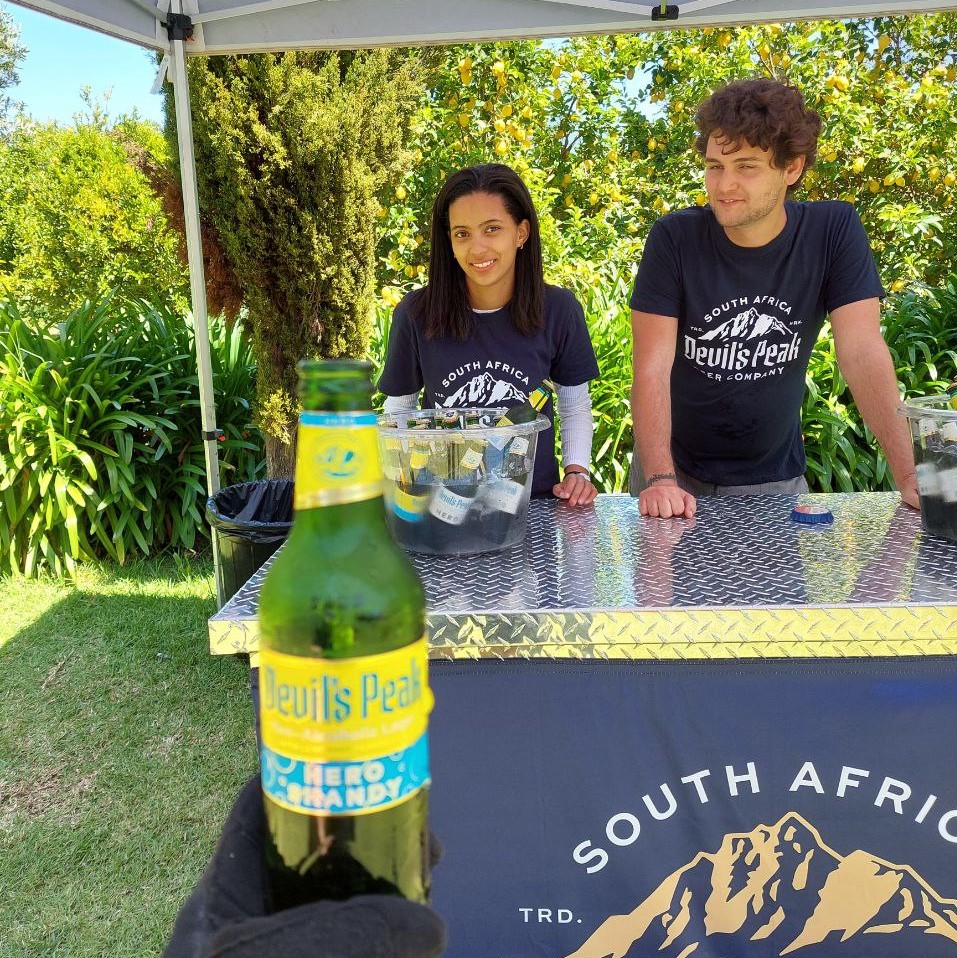 The abundance of food and the practiced efficiency of the Oak Valley and Tipsy Gypsy bars contribute to this. There is seldom a queue and grabbing a drink is a quick and easy process. In fact, the only queue you are likely to experience, off-the-bike, is for coffee and even that moves remarkably quickly. The crew manning the Woolworths coffee truck are true professionals!

But the main factor which makes W2W so great is the riders. Especially for someone like me who spends between 50 and 80 days a year at bike races. Wines2Whales is the one time I really get to socialise with riders. In previous years, working on the event it’s always been a quick drink or a short chat over a meal. Riding the Pinotage freed me up to spend quality time with people I see often but never really get to hang out with. 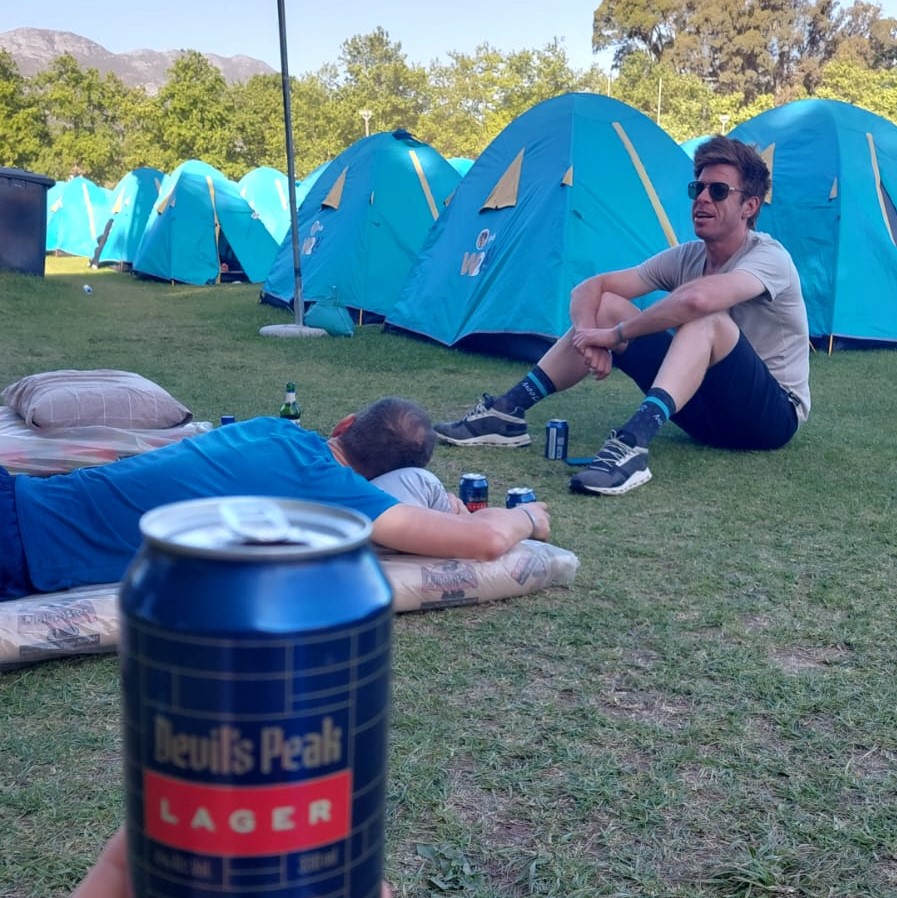 Afternoon beers with the boys.

By chance David and I ended up camping next-door to Erik Kleinhans, Johan Cronje, Warren Langridge and Nico Oosthuizen. This meant that we had a ready-made crew, which swelled to include the Princess of Stellenbosch, Matt Daneel, who obviously doesn’t camp. Add in Dave’s former housemate, Arné van Rensburg and Woolies’ Reinette Geldenhuis in the chill zone in the evenings. Much nonsense was spoken. Most of it unpublishable. But that’s the beauty of stage racing.

You get over tired. You bond quicky. And you laugh about things that happened out on the trails. To use a few Afrikaans words I love peppering my descriptions with. It’s lekker. And it was a jol. The best thing about stage races are the people. And Wines2Whales attracts the best people. 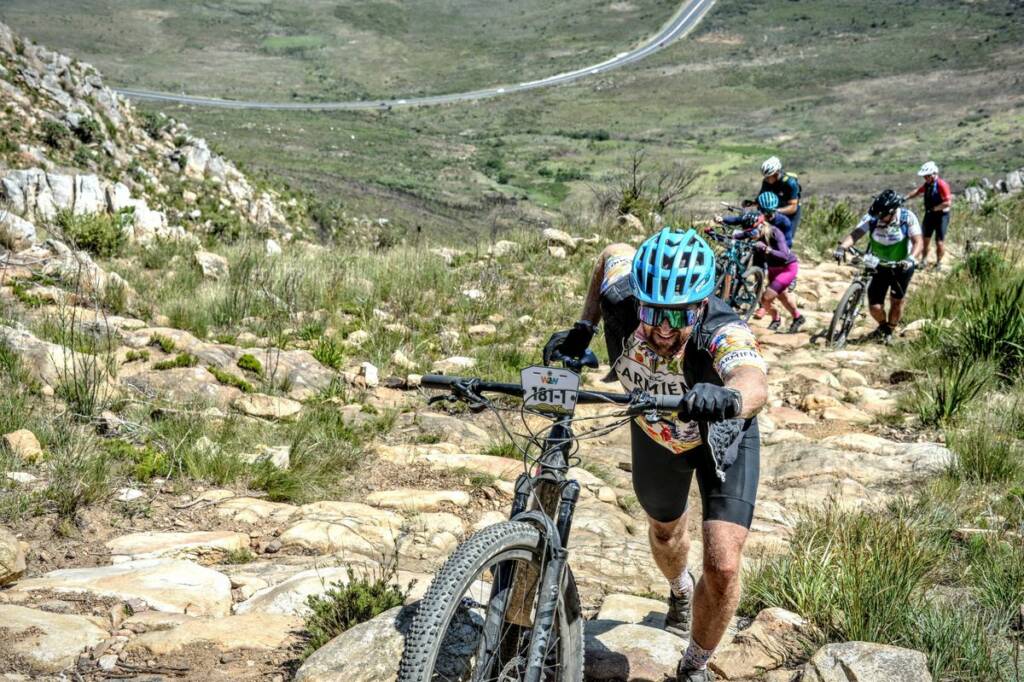 Even the hike-a-bike up Gantouw is actually fun.

If you want to call that serious gees, that’s okay. I’ll agree but I’ll still scowl. Rather take the time to explain, that the race facilitates a great experience all round and that the riding is only a small part of that. It’s off-the-bike where Wines2Whales comes to life. And taking part rather than working on the event was definitely the way to indulge in best features of W2W.

See you in Oak Valley next year. Gather a crew and sign up, I can promise a great time with good people. Where else do you get that guarantee? 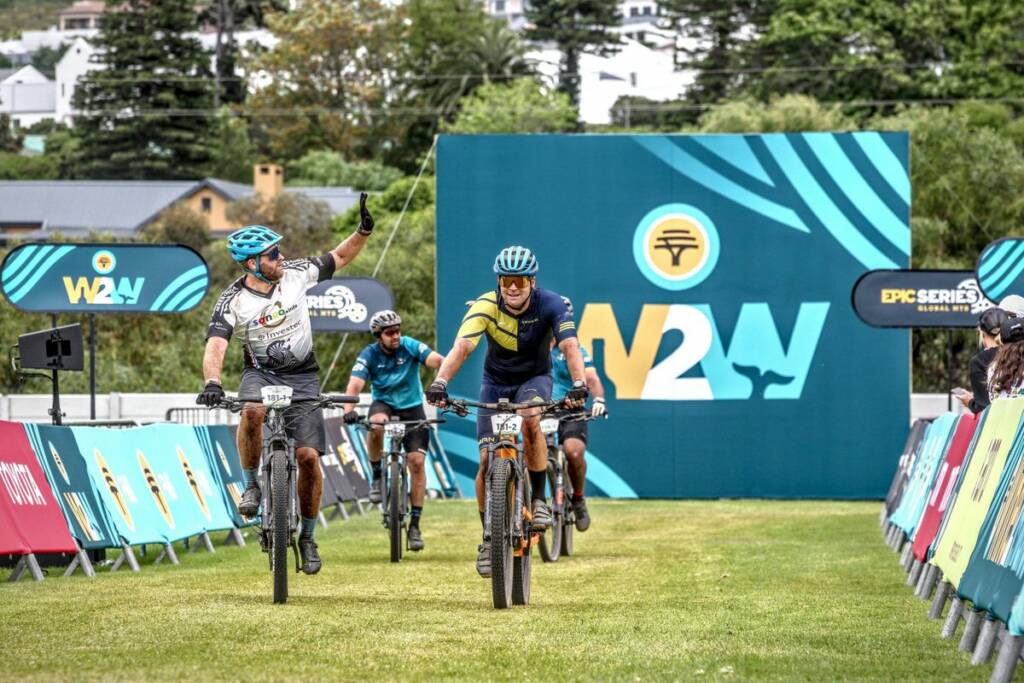 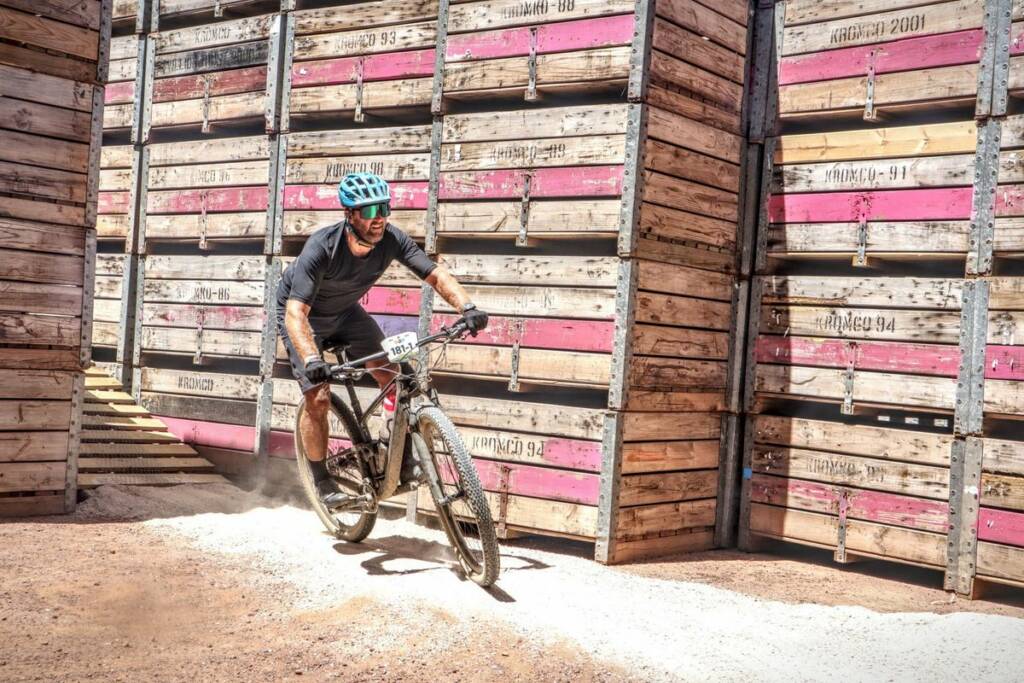 The new Cluver Play Park was a blast too. 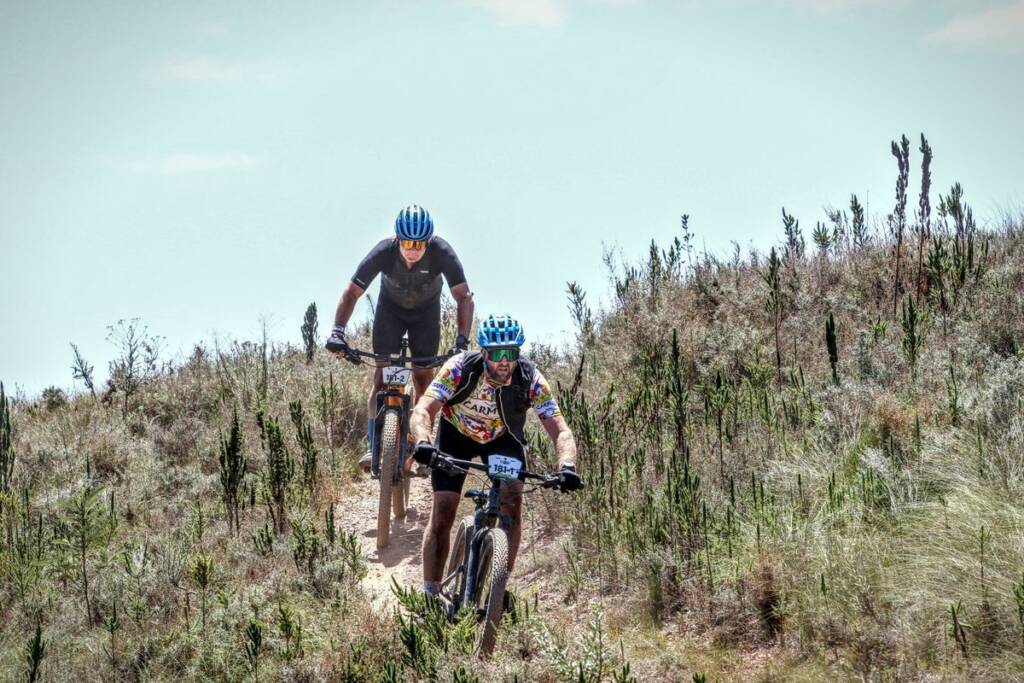 A rare shot of Dave and Seamus actually riding together.