Oudtshoorn’s Yolande de Villiers and Denmark’s Simon Andreassen coped relatively well with the extreme heat in the Klein Karoo on Saturday, 15 January 2022. In doing so the pair were able to best survive the 16th edition of the Momentum Medical Scheme Attakwas Extreme, presented by Biogen. Their victories were completed in 6 hours, 6 minutes and 18 seconds; and 5 hours, 11 minutes and 20 seconds, respectively.

Neither of the eventual winners, nor anyone else on the start line in Oudtshoorn was under any illusions at 06:30 in the morning. It was clear then, with the mercury already climbing to 30 degrees Celsius, that it was going to be an exceptionally challenging day. The type of day which provided the race with its Hell of the South nom de plume.

In the men’s race the action was as hot as the temperature from the off. Marco Joubert, of Imbuko {type}DEV equipped by Giant, was the first to drive up the pace. “They were going like crazy early on already” Tristan Nortje, of Specialized, recounted. “I looked at my bike computer and saw that I was already over my VO2 Max and we were inside the first 20 kilometres. That’s when I decided to rather take it a little easier.” 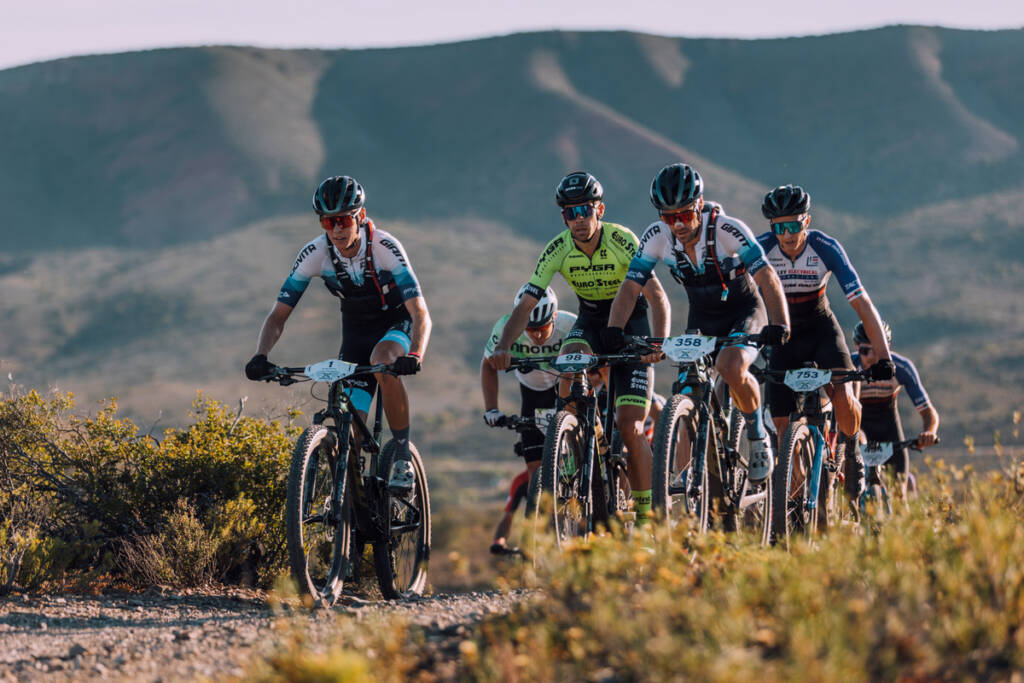 Nortje’s tactic was echoed by the Cannondale Factory Racing pair of Andreassen and Alan Hatherly. The trio passed through water point 2, at the 54 kilometre mark nearly 2 minutes behind the front selection. This elite group was driven on by Matt Beers (Specialized), with Phillip Buys (PYGA Euro Steel) and Wessel Botha (Imbuko {type}DEV equipped by Giant) shadowing the South African Marathon Champion.

Joubert’s early aggression was undone by a binding front brake, perhaps caused by the extreme heat expanding the oil in his brake lines. The temperatures were so hot that some riders reported their bike computers registering 50 degrees Celsius in places. Though a more reliable high of 47 degrees was measured by Mike Posthumus’ Wahoo.

Staying cool or attempting to stay cooler was the order of the day. “When I saw Simon [Andreassen] stopping to refill a bottle at the first water point I thought he was struggling” Nortje confessed. “In hindsight that was the right move.” “I was suffering with the heat right from the start of the Neutral Zone” Andreassen allowed. “Because of that, I stopped at every water point to fill a bottle and after water point 2, to pour cold water over myself. I think that really helped.” 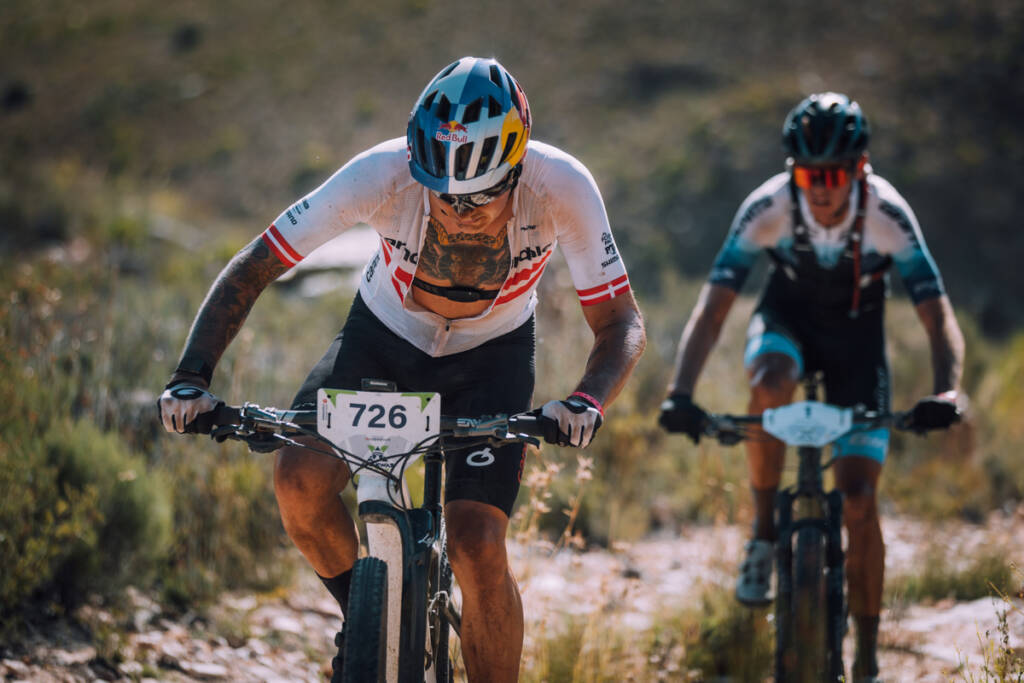 “I’ve never experienced anything like this” the Danish cross-country champion added. “It was the toughest race I’ve ever done. The course is obviously difficult, but the temperature made it far harder.”

Andreassen and Nortje lost their companion, Hatherly, to a pair of punctures on the climb towards the King of the Mountain point. There, with 70-kilometres to race they were 3 minutes behind Buys, who was first over the summit, and Beers. Botha had faded back to the chasers as the toll began to tell on the 2021 champion.

Over the next 20 kilometres Andreassen and Nortje rode conservatively. Despite not pushing the pace they reduced the deficit to Buys and Beers. Shortly after exiting the Attakwaskloof the pair caught and passed Buys. Within 5 kilometres they had reeled in Beers too. 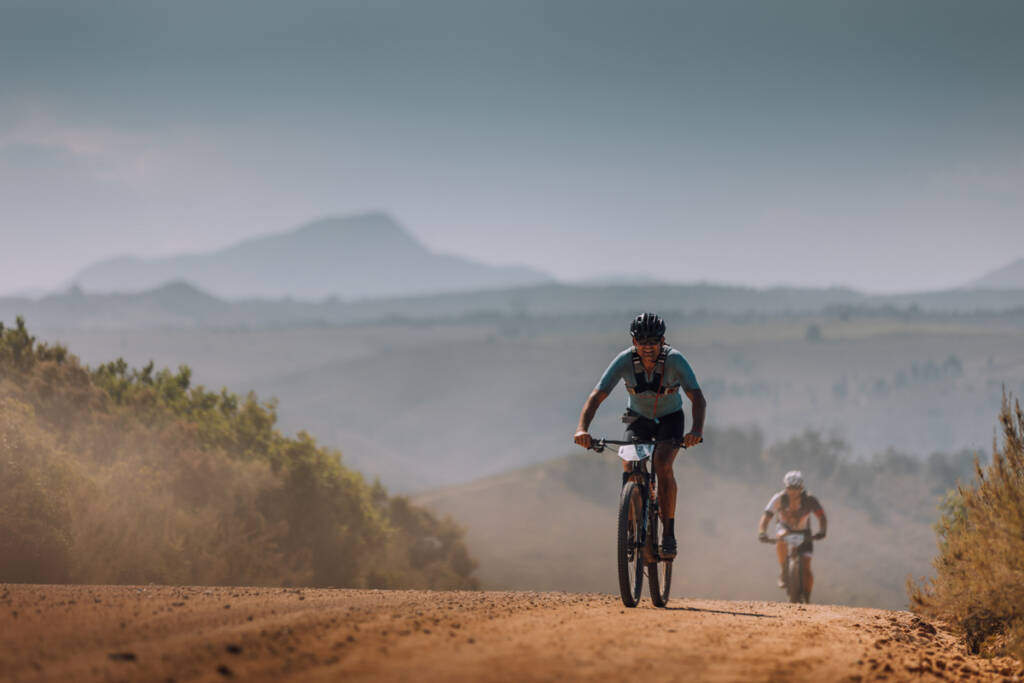 The mercury rose to above, or very close to 50 degrees on the Momentum Medical Scheme Attakwas Extreme, presented by Biogen, route. Photo by Ewald Sadie.

“I was getting dizzy and my vision was blurred” Beers recounted. “I honestly thought I was going to die. It was terrible. I didn’t sit up and let Simon [Andreassen] and Tristan [Nortje] catch me. I just couldn’t put any power into the pedals. I had hoped that riding with them for a bit would give me a chance to recover, but that wasn’t to be and they just rode away from me.”

“Simon [Andreassen] flew through water point 4” Nortje said. “I was really surprised, I thought he’d made a mistake. But he was the strongest rider today and looked after himself in the heat really well too.” “I think I had an advantage coming from Denmark and -4 degrees” Andreassen joked. “I was still thawing while everyone else was already hot.”

“What’s 15- to 20 seconds in a 5 hour race?” Andreassen asked. “Taking the time to pour cold water on myself really paid off.” His speedy water point approach meant he never conceded positions on the road in the process and once he distanced Nortje, with 30 kilometres to race he was able to time-trial to Pine Creek to claim a commanding victory.

Nortje was second, 3 minutes and 24 seconds behind the Dane. Beers hung on to finish third, 7 minutes and 44 seconds back. Botha was fourth and Buys completed the podium in fifth. 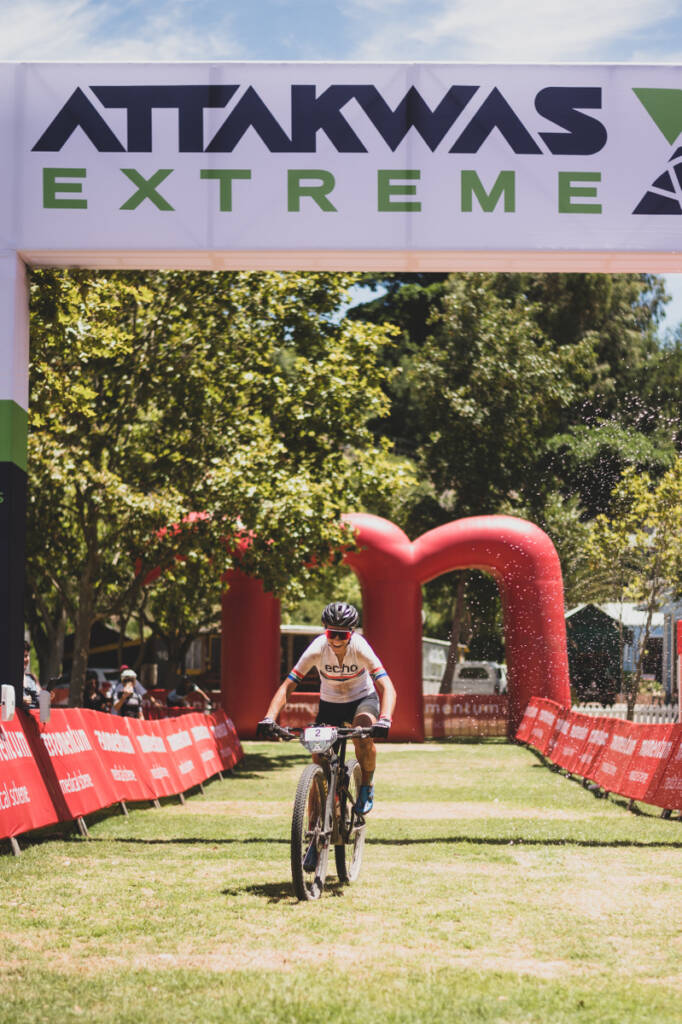 In the women’s race De Villiers was dominant from the off. “I like starting fast” she explained. “I set a good tempo early on and Amy Wakefield came with me. But I could hear her struggling with her breathing behind me. When I asked her to come through and do a turn, she said she couldn’t. So, I put in an acceleration on the next climb and rode the rest of the race solo.”

“110 kilometres solo was really tough! Especially in the heat” De Villiers pointed out. “But I just kept going, pouring water over myself at every opportunity and drinking far more than I usually do. I normally start the Momentum Medical Scheme Attakwas Extreme, presented by Biogen, with a single bottle on my bike. Today I rode with a hydration pack and I had finished it before water point 2!”

“It was brutal but I’m really happy to take the win” De Villiers concluded. Sarah Hill and Mariske Strauss were second and third, while Elrika Harmzen-Pretorius and Leone Verster completed the podium. “I said last night that this would be the toughest Momentum Medical Scheme Attakwas Extreme, presented by Biogen, I’ve ever done” Hill laughed. “And it was! But I think everyone who finishes today can be really proud of themselves. It was brutal.” 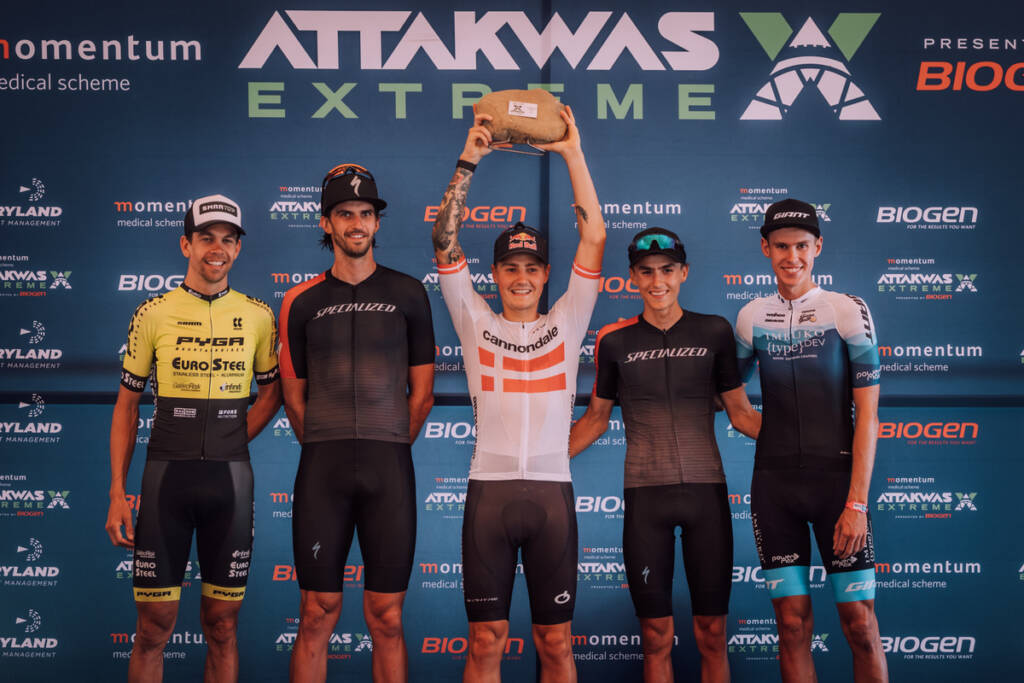 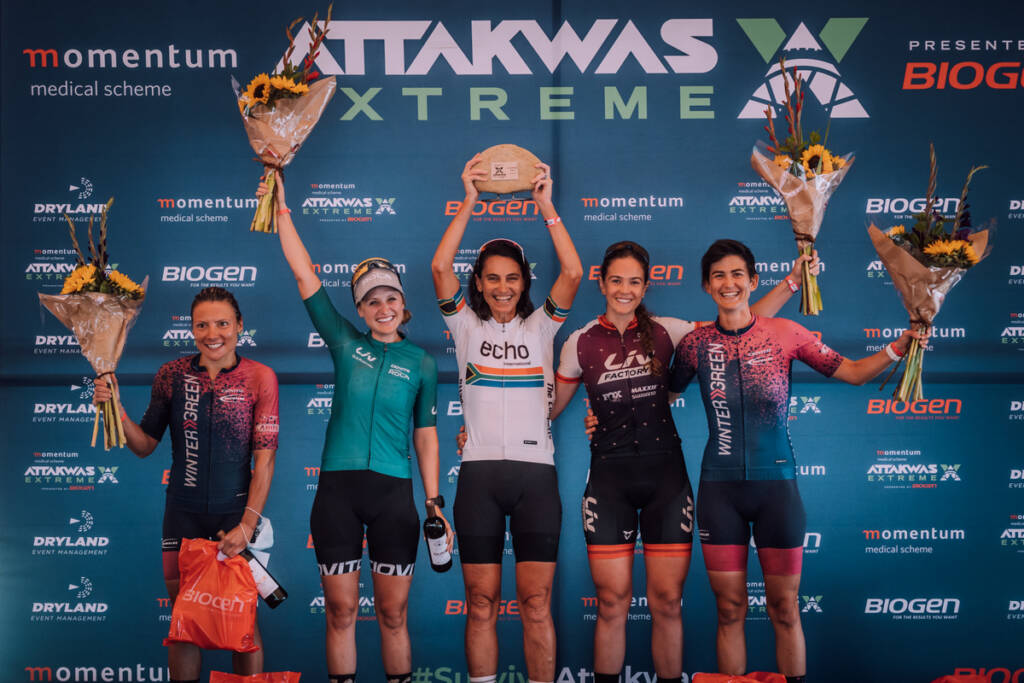 For more information and the full results from the Momentum Medical Scheme Attakwas Extreme, presented by Biogen, please visit www.atta.co.za.